bazelio said:
+1 to USB microscopes being great for pretty pictures, much less so for cartridge setup measurements.

That pencil lead needs to be perfectly parallel to the plane of the stylus edge in order to be useful. Good luck with that!
Click to expand...
It's all finicky and time consuming. You still need your native eyes (rather than only the microscope.) Even if we assume you can get the pencil lead very close to parallel, you need to gauge the resulting picture to get a take on that. That's just to get a measurement. It's too much time and very difficult to make teeny tiny adjustments.

PeterA said:
I now make all adjustments by ear/listening.
Click to expand...
As do I.
See my Mahler thread here.
Likes: bazelio

PeterA said:
What happens to the angle when you replace a think classical LP with a much thicker 180g Jazz reissue?
Click to expand...
Yes - it's likely the angle will change. Iirc Wally Malewicz (the originator of the method from whom Fremer got it) suggested taking USB microscope pictures using a thin and thick record. Hopefully one's tonearm supports some means to indicate height so there are reference points, or you can use the card method. Wally was aware of the issues.

This is all just a deeper dive into the issues Fremer does not cover in detail. I'm not an advocate. There are numerous audiophiles who, for various reasons, hope for mechanical (rather than aural) solutions to the intracacies of cartridge setup. SRA remains bothersome to many. The time may be better spent becoming intimately familiar with a few select passages on a few records to the point where you hear the differences that adjustment makes.
See my Mahler thread here.
Likes: PeterA, Kcin and bazelio 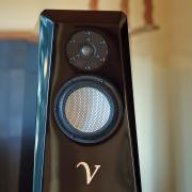 I use a USB microscope to get a baseline setting, then tune by ear. It’s a lot quicker in terms of giving you a starting place that should be close. That said, when I’m lazy, I’ll just use a bubble level to get the cart parallel to the record, then tune by ear from there. That technique doesn’t work with all carts of course.

One tip using the microscope to get the lens parallel to the stylus - the microscope at high zoom levels will have a very shallow depth of field so if you get the cantilever in view and focus on it, check that the length of it is all in sharp focus - that will get you pretty close to parallel. Then the trick is getting a good reference to level - usually the surface of a record is ok but I prefer to use a mirrored setup jig that I have.
Joe Hakim
President & CEO

PeterA said:
Great photos, Tima. I used a USB microscope to attempt this cartridge SRA setting and found that the best use for this equipment is the nice photographs. What happens to the angle when you replace a thin classical LP with a much thicker 180g Jazz reissue?

I now make all adjustments by ear/listening.
Click to expand...
Although photographs need a lot of care I would not dismiss them so easily as the alternative seems to me to be even more non-reliable and extremely time consuming. The few times I witnessed people setting SRA by ear no two people agreed on the best setting ... And it was not a .5mm difference.

"BTW, what happens when your stylus suspension settles after one month playing? "

After the suspension settles you simply re-adjust by listening. Are you suggesting you would rather get the camera out and remeasure and make arm height adjustments that way after the cartridge suspension settles? Of course that is fine but I think it seems people have different approaches to setting SRA. The approach that works best for the person is probably the best approach for that person.

I wonder what one does when he sets the SRA at 92 degrees for the one LP used for the USB measurements and then switches to an LP of different thickness. Then what? Arm height differences of 0.5mm are audible by some people in some systems. That height difference is roughly equivalent to 1/8 of one degree for a 9" arm. Even less, obviously, for a 12" arm. The difference in thickness between my thinner classical LPs and my thicker jazz and pop reissues is often more than 1.0mm. It's a controversial topic and there is much disagreement, but somehow we can all enjoy the music.
Last edited: Mar 19, 2019
My system link on WBF: https://whatsbestforum.com/threads/sublime-sound.12853/
Analog: SME 30/12, SME V-12, SME 3012R, vdH Master Sig. Stradivarius, My Sonic Labs Sig. Gold, AirTight Supreme, vdH Colibri XPP, stock SME phono cables
Electronics: Pass Labs XA160.5 amp, XP-22 preamp, XP-27 phono, Cables: Burley Wire, Ching Chen power cords, Speakers: Magico Q3, four dedicated circuits
Likes: tima

I think the VTF has much bigger impact than SRA, and that it is actually when getting the SRA correct that the chance is bigger to get more correct VTF.
I even think I can proove it
I know that's quite a mouthful to proove, but at least I could outline that idea.
If changes in sound are very small then they are not important.

Calle_jr said:
I think the VTF has much bigger impact than SRA, and that it is actually when getting the SRA correct that the chance is bigger to get more correct VTF.
I even think I can proove it
I know that's quite a mouthful to proove, but at least I could outline that idea.
Click to expand...
That sounds interesting. What are your thoughts?
My system link on WBF: https://whatsbestforum.com/threads/sublime-sound.12853/
Analog: SME 30/12, SME V-12, SME 3012R, vdH Master Sig. Stradivarius, My Sonic Labs Sig. Gold, AirTight Supreme, vdH Colibri XPP, stock SME phono cables
Electronics: Pass Labs XA160.5 amp, XP-22 preamp, XP-27 phono, Cables: Burley Wire, Ching Chen power cords, Speakers: Magico Q3, four dedicated circuits

PeterA said:
What are your thoughts?
Click to expand...
NorthStar said:
I'm also interested.
Click to expand...
You have to give me a day or two. I need to prepare.
But I promise I will come back.
If changes in sound are very small then they are not important.

Take all the time...a week or two; time is on our side.

Instead of the CD (laser reading) video I should have posted the LP (cartridge tracking) video ...

From COP to COM

This issue was raised by a close friend of mine. His friend in turn, told him that he got totally incorrect VTF and after correcting it he got heavy distorsion. The VTF was set by my friend and with his gauge in the first place.
It was a bit of a mystery.
I've experienced strange readings some times myself, both in my own systems and in others. But I never really dug deeper to it, because I didn't think it was that important. But if you'd look closer to the scenario with my friends friend, you'll find it's a perfect example of the "phenomenon" (woooh).

The "phenomenon" is that VTF is greatly influenced by the relationship between the center of mass (COM) and the center of pivot (COP).

Tonearm manufacturers can control the COP, but they can't control COM because it depends on the cartridge. Franc Kuzma didn't put the headshell low to make the tonearm look cool. And the big counterweight wasn't placed low by chance. If you go to detail on the "four points" you'll find several such ingenious designs in that arm, like keeping the pros of a unipivot and removing the flaws and lability by adding "invisible" points. Another one is to make most cartridge alignments with your rough hands, and make the final two VTF and azimuth like a woman with just a sensitive gauge and a tiny allen key.

The "phenomenon" can be visualized by looking at a carpenter's square:

This is intuitive, I know, but since the COM is very close to COP (about 1mm), this has great impact on VTF. When you start balancing a tonearm, you start with just the weights of the tonearm, cartridge and counterweight. In this situation, VTF=0 which means b0=0 above. When the counterweight is moved forward, VTF will increase, which means also b0 increase. But this increase in b0 is very small since VTF is just a few permille of the total weight.

My friends friend was using a stylus gauge with a measuring platform which is 3mm thicker than an LP, and a new 2mm platter mat which he didn't like so he got rid of it. So, totally unaware, he was measuring 5mm higher than when the cartridge was calibrated last time. 5mm? That's a very small angle for a 12" arm. Could that really matter that much?

Let's calculate what that means.
We need some measurements from an arbitrary setup so I assume some (it could be mine ):

Start by calculating VTF when the stylus is correctly placed, i.e. at the same height as when playing an LP: 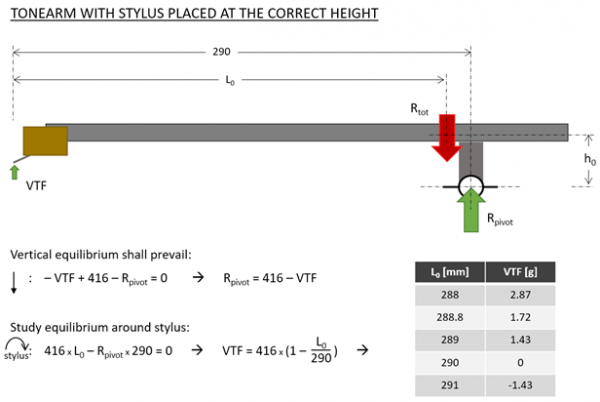 With VTF=1.72g I get the lowest THD, which means the position of the resulting force is 288.8mm away from the stylus along the tonearm.

Now, what happens when I lift or lower the cartridge? I can calculate the actual VTF for some different angles. If I would raise the cartridge by 5mm, it means approx 1 degree angle for a 12" arm. The vertical distance between COM and COP also affects this calculation. It's not so easy to find out this dimension, but 10-20mm or more is not uncommon.

So, my friends friend thought he had VTF=1.28g, so he raised it by half a gram. It is obvious that this has impact on the performance of highend cartridges, and it certainly was for my friends friend. Even more if you have a short and/or heavy tonearm.


I'm quite doubtful to some of the occuring theories on SRA and VTA. The differences between cutting angles are greater than the errors we (users) normally make, and it seems the stylus geometry is quite similar within a range of angles (for this reason?) if you're using correct VTF. So, I simply think that some people optimizing SRA/VTA in fact optimize VTF for their specific case.

In summary, my thoughts about changing VTF are:

I don't know if this was bullet proof, but I hope it's at least some thoughts.


PS. There should be some members here with industry information on how the span for VTF is elaborated by them.
Last edited: Apr 2, 2019
If changes in sound are very small then they are not important.
Likes: Marcus, Catcher10 and bazelio
You must log in or register to reply here.
Share: Facebook Twitter Google+ Reddit Pinterest Tumblr WhatsApp Email Link