The new Hidden Treasure SATA cable provides better data transfer by reducing jitter and RF contamination, resulting in a lower noise floor and notably improved sound quality in audio components such as computer-based music systems. It can be easily installed as a DIY upgrade.

“More audiophiles are turning to music servers and other data storage, drive-based devices for their music listening, and these devices require a SATA cable for connecting the drive to the rest of the internal electronics,” noted John McDonald, president of Audience. “As a cable manufacturer it was a logical area for us to look into. We’ve discovered that upgrading the stock SATA cable with our Hidden Treasure cable can significantly improve the sound.”

Transmission of data including digital audio signals through a SATA cable happens at a much higher speed than via a USB connection and as a result, is more susceptible to jitter and internal system noise. The Audience Hidden Treasure SATA cable employs newly developed proprietary design techniques intended to block noise and ensure optimum signal condition and data integrity. By removing layers of sonic “grunge,” the audible result is greater low-level detail and a smoother, more inviting sonic presentation.

Although the retrofit of a component’s stock SATA cable with a Hidden Treasure SATA cable is a simple un-plug and re-plug function, Audience recommends that the upgrade be performed by a qualified technician. Audience also recommends consideration of the manufacturer’s warranty that could potentially be voided when modifying a particular music player. Audience accepts no liability for damage caused by improper installation. 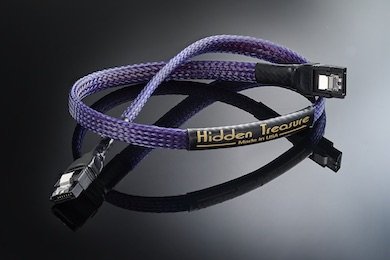 I
I've finally made up my mind about FLAC vs uncompressed...sigh. Hard drive makers rejoice.