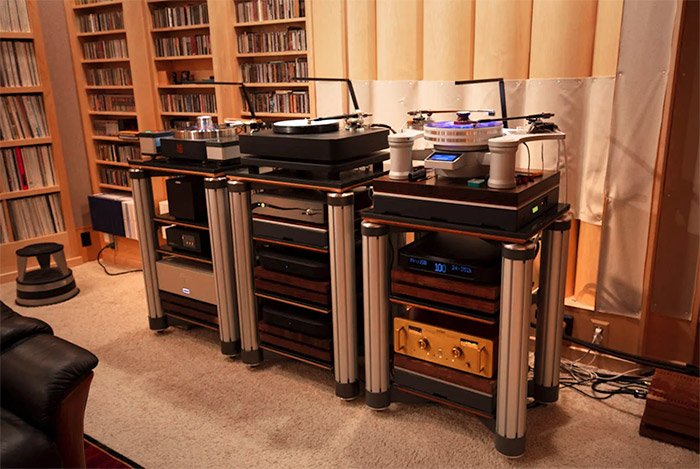 i've finished my digital push....and been working on a few odds and ends to fine tune my vinyl. had my 3 tt's for 3 years now, thought long and hard about consolidating the 3 into one 'big-boy' tt, but at the end of the day have decided that the three tt's cover state of the art vinyl rotating and so they are all keepers. i like what each does too much, and nothing else enough, to change. i will likely sell my 4th tt, the EMT948 i got a year ago, as i'm rarely listening to it.

a month ago i ordered the DaVa Ref (field coil) cartridge and did post about that. it's still approximately 3 months away. so May. it will replace one of my 3 Etsuro Gold MC's.

i've been working on a new tone arm for the last couple of months, and did finally order the 12" Primary Control FCL (field coil) tone arm last week. that's also scheduled to arrive in May. my initial plan was to combine the DaVa field coil cart with the field coil arm. but i've learned that is not a good idea. that arm/cart combo not synergistic. so the DaVa will be mounted on one of my Durand Tosca's. the FCL arm will then have one of my Etsuro Gold's.

right now, the plan is to mount the FCL arm on the Wave Kinetics NVS, and keep the Tosca on the Saskia with the Dava cart. but i will have arm boards for both arms, for both turntables. so i can play around with the best combinations. my goal is to have the best jazz/blues arm/cart combo on the Saskia, and the best classical/pop combo on the NVS to compliment the CS Port linear tracker for classical/pop. the Durand Telos which now has my Miyajima Infinity mounted will be moving on, and my other Tosca will now do both my Infinity Mono carts.

lastly; i have ordered today the EMIA Phono Corrector in silver, with 2 power supplies. it will hopefully be here in late April. it will replace my CS Port phono. once the DaVa cartridge arrives; Dave Slagle will work with me to identify the best SUT as a match for it, and Dave will then combine that SUT with a silver SUT for both Etsuro Gold's into an EMIA MC Trio. i'll trade my current pair of silver 1:10 EMIA SUT's in on the MC TRIO. so the Phono Corrector will service all three cartridges, leaving the mono carts for the darTZeel phono. the MC Trio will also have a mono switch, so i can use it for the mono's if i like.

to help pay for all these items, i'll be selling the EMT 948 with Durand Kairos arm, one Etsuro Gold, the CS Port phono, and one of my Studer A-820's (without the head switch and with 1/4" and 1/2" guides and head blocks) i have not been using. so there will be some pain, but not crazy amounts of it. it will be a few months, but i can ride off into the sunset once these things are in place and dialed in.

at least it's a plan. and checks have been written.
Last edited by a moderator: Sep 30, 2022
Click to expand...
M
Written by

What phono input value are the 1:50 users using?
Mike's Emia is in the neighborhood of 300k. Most other users would probably be at the traditional (and much less flexible) 47k. If the Dava would prefer something heavier than 100-120R then we'd just whip up a set of load plugs. I could send a set up if Mike wants to test, but it sounds like the bass response he's getting already is to his liking.

What's the output level of the Dava?
Last edited: Aug 20, 2022
last night and this morning been listening to the CS Port/Etsuro Gold as i'd not done that all week. wow, so special at it's extravagant degrees of ease, delicacy and expansiveness. the decays go on forever. the musical touch is addictive. linear trackers have some very special ways to envelope you into the music.

very satisfying to hear, and tickled at my long term musical enjoyment prospects with all three tt's finally delivering each what they will.....together. it where i wanted my vinyl experiences to get to for my own enjoyment. not about better or best or anything like that. just access to all the corners of my music experiences.
Last edited: Aug 20, 2022
Reactions: amadeus, Bobvin, marty and 3 others

bazelio said:
What's the output level of the Dava?
Click to expand...

0.2mv listed on the note from Darius.

bazelio said:
I'd like to time a trip up north with the completed MC Trio, and perhaps your next staycation! Dava and 1:50, wow! Super interesting. Enjoy!
Click to expand...

looks like should have the MC Trio in about 3 weeks according to Jeffrey. so there you go.
Reactions: bazelio and bonzo75

bazelio said:
I'd like to time a trip up north with the completed MC Trio, and perhaps your next staycation! Dava and 1:50, wow! Super interesting. Enjoy!
Click to expand...

Hmm, sounds like a trip north could be fun, to hear these new toys you have Mike. Let me know when this shindig unfolds.
Reactions: bazelio

Bobvin said:
Hmm, sounds like a trip north could be fun, to hear these new toys you have Mike. Let me know when this shindig unfolds.
Click to expand...

Ked arrives on Friday the 23rd of September....and will be here until Sunday night. maybe back later the following week a few days too.
Reactions: christoph, spiritofmusic and bonzo75

Mike Lavigne said:
Ked arrives on Friday the 23rd of September....and will be here until Sunday night. maybe back later the following week a few days too.
Click to expand...

A tiresome weekend ahead Mike.
Reactions: analyzer, christoph and XV-1

Tango said:
A tiresome weekend ahead Mike.
Click to expand...

I suspect that Mike will be moving nonstop setting up various comparisons. I sincerely hope there are some videos showing the differences between the turntables, tonearms, and cartridges. There must be about 50 different permutations. This is Ked’s forte.
Reactions: the sound of Tao and christoph

PeterA said:
I suspect that Mike will be moving nonstop setting up various comparisons. I sincerely hope there are some videos showing the differences between the turntables, tonearms, and cartridges. There must be about 50 different permutations. This is Ked’s forte.
Click to expand...

apparently, i had not really thought this through very well. sigh.
Reactions: the sound of Tao

Tango said:
A tiresome weekend ahead Mike.
Click to expand...

no.....it will be a joy. totally.
Reactions: the sound of Tao, wbass and Solypsa 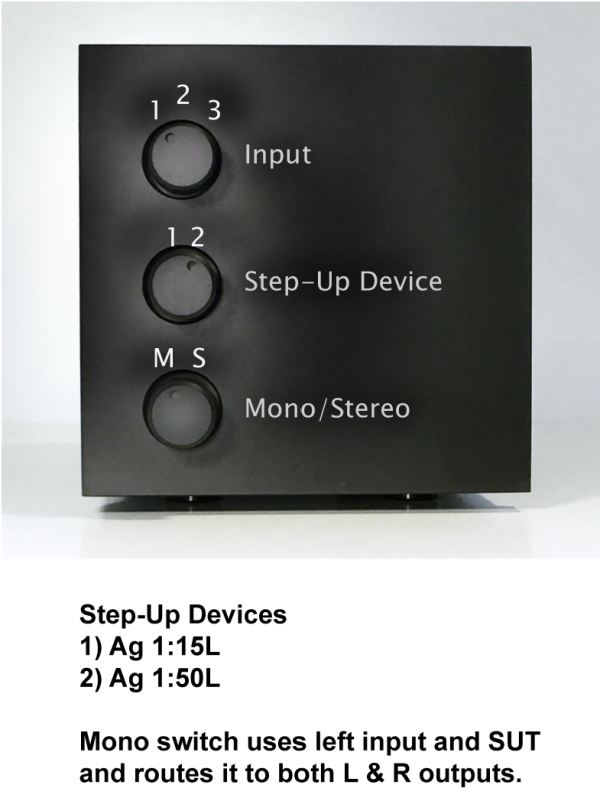 Reactions: the sound of Tao, bonzo75, marty and 3 others
Oh now that's borderline fancy and almost too user friendly to be badged Emia!

in the finest EMIA tradition......that's what was sent to me as the owner's manual, expanded edition.
Reactions: cmchan and the sound of Tao

I don’t think the text is on the actual device?

Mike Lavigne said:
that is an actual pic of the front plate. the EMIA SUT's have the same engraved paint filled type script.
Click to expand...

Hmm, the middle number 1 looks like it’s going off the edge.

djsina2 said:
I don’t think the text is on the actual device?
Click to expand...

i think you are correct (i deleted my first 'wrong' response). i'll have it tomorrow.
Reactions: djsina2
You must log in or register to reply here.

M
Is there a "World's Best Cartridge?"

Phonostages Wednesday at 10:48 AM
plasmod3
P

Analogue Heaven in Paris - My Visit to Ana Mighty Sound