Here are brief descriptions of my current audio systems. I will try to keep these up to date as components and configurations change.

If components I've talked about in threads of Tom's Corner are not listed here, you can assume that I have either sold those items or that they are currently for sale.

The links in these descriptions are either to my own descriptions of these components at WBF, or to sales or manufacturer's information.

My latest changes include updates to the streaming path in the audio room system and a whole new computer for my desktop system. The above pictures and system descriptions have been updated to account for these changes.
Reactions: Ron Resnick

My latest system update is the change to a LEDE acoustic treatment configuration with the substitution of Alphasorb Flat Foam for the P. I. Audio Group AQD1 diffusers at the speaker end of the room. See my thread, "Acoustic Treatment for Small Listening Rooms: Absorption vs. Diffusion" for discussion. Here is a wide-angle photo of the new speaker-end of the room with the Alphasorb Flat Foam panels. 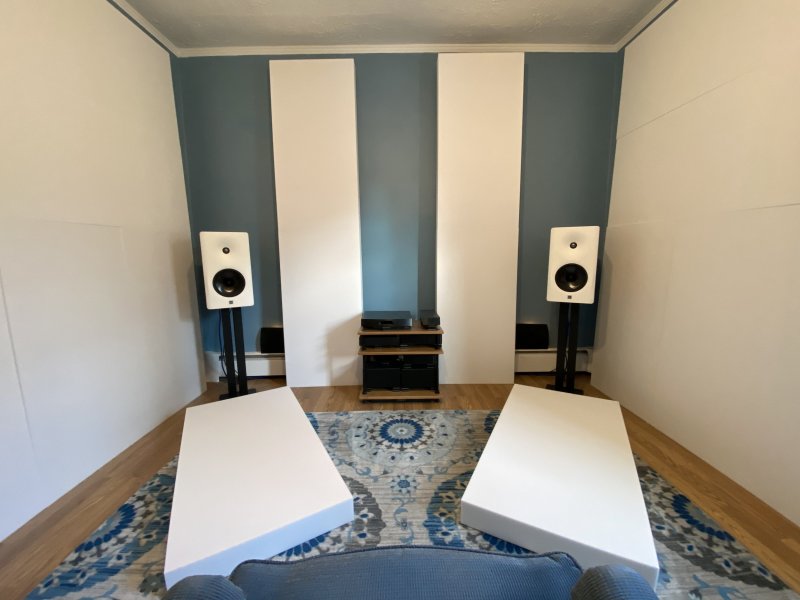 I use this system primarily for video streaming, but also for some music streaming. See generally, "My Electrostatic Headphone Adventures."

Here is a picture of my Audio Room system with the latest acoustical foam arrangement and the Dutch & Dutch 8c speakers mounted on Skylan four-post 26"-high stands. 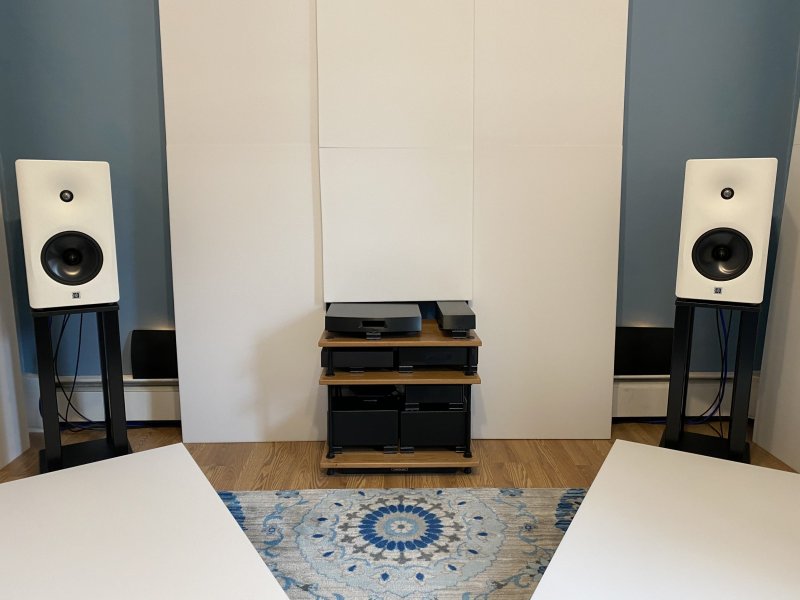 Yesterday I replaced my Netgear Nighthawk Pro Gaming Switch S8000 with the UpTone Audio EtherREGEN ethernet switch. The Netgear Nighthawk had been a clearly audible improvement from the TP Link and Cisco switches which proceeded it and Archimago found much to like about it, as did I. I really heard no problems at all and have been delighted with the sound of my Dutch & Dutch 8c-based system throughout my use of the Nighthawk switch.

However, the reviews of the EtherREGEN got me very curious about it. Then, when The Absolute Sound named it one of its 2020 Products of the Year, I had to see what all the fuss was about. I knew from half an hour into its warm up (yes, the EtherREGEN runs hot, Class-A-amp hot) that something really special was happening. I'll refer you to the reviews in Audiophile Style and The Absolute Sound. But I'll just say that the combination of greater three dimensionality, greater small musical detail of both tones and transients, and expanded moment-to-moment microdynamics, without any tonal brightening is impressive and enthralling. Who knew an ethernet switch could make such differences? It's as if the time coherence of the D&D speakers has been truly unleashed. These improvements are clearly audible as I write this from my computer desk, well outside the audio room with the system playing at background music levels.

Yes, at $640 it's expensive as ethernet switches go, but it's a bargain in terms of the audible difference it has made in my already pretty well-tuned system. You may have to wait a while to get one; it regularly seems to be back-ordered for at least a month.

Did I mention that this thing runs physically HOT? It does, so don't be surprised or alarmed. Just give it some space and enjoy!

I don't understand the computer equipment discussion, but I am glad you are happy with the improved sound!
Toggle signature
Mono and Stereo - Senior Contributing Reviewer

Thanks, Ron. There is a Great Divide between traditional audiophiles--those who listen to analog (and perhaps digital-disc-based sources) only--versus those who also or even exclusively now listen to music sourced from internet streaming or computerized music files. If you are still primarily an analog LP listener, much of what goes into constructing an audiophile-grade computer-based audio and streaming system may well seem like gibberish.

An analogy might prove helpful. Just as the simplest LP-based system is the old briefcase-sized all in one "record player" many of us oldsters had as kids--it had a latchable lid, a single built-in speaker, amp, and turntable/arm/cartridge--the simplest modern computer-based music system is a smart phone connected to the internet streaming music through its own built-in speaker.

With an analog system, the system can get a lot better sounding if you separate out the various parts: separate speakers, power amp, line amp, phono preamp, turntable, tonearm, cartridge, cables, etc., plus a lot of careful set up, paying a lot of attention to the audible effects of each physical part of the system.

A computer-based system also can get better sounding by separating out its parts and connecting those parts in particular ways, paying careful attention to the resulting sound of each part change as you go. With computer based systems, one major choice is between Wi-Fi connectivity and wired ethernet connectivity. Many of us have found that wired ethernet systems sound better. Once you wire internet-connected components together with ethernet cables, you will need at least one ethernet switch to act as a "hub" for all the wired internet connections. As it turns out, different ethernet switches have different sonic qualities--thus the comparisons I made among the TP Link, Cisco, Netgear, and now the EtherREGEN ethernet switches. As with analog audio, most every step in the signal path has a "sound" and some components sound "better" than others.

Thank you, Tim, for the analogy and the explanation. I understand!
Toggle signature
Mono and Stereo - Senior Contributing Reviewer

If you look at my system description, you will notice that it now includes both the Uptone Audio EtherREGEN (ER) and the GigaFOILv4 (GF). In my system, the ER feeds the GF, which feeds the Lumin X1.

I am very much aware that the manufacturers of both the ER and GF state that their unit should be the last item in the chain before the streamer/DAC. In fact, the manufacturer of the ER is on record stating that fiber optical isolation such as that provided by the GF should not be necessary either before or after the ER in the signal chain.

Using the GF fed by the ethernet cable which comes from my router and having the GF feed the ER does not really result in any improvement over the sound of the ER alone.

The ER alone also is far superior sounding to my old set up of the Netgear Nighthawk S8000 Pro Gaming Switch feeding the GF feeding the Lumin X1. If you had never heard the system with the ER feeding the GF, you would never know what you were missing.

But using the ER feeding the GF removes additional noise/blur/grunge around each note and further blackens the background. In my system, to my ears, this is the way to go. 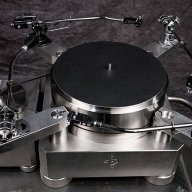 tmallin said:
Thanks, Ron. There is a Great Divide between traditional audiophiles--those who listen to analog (and perhaps digital-disc-based sources) only--versus those who also or even exclusively now listen to music sourced from internet streaming or computerized music files. If you are still primarily an analog LP listener, much of what goes into constructing an audiophile-grade computer-based audio and streaming system may well seem like gibberish.
Click to expand...

This is true IME and true for myself as well but avoiding computer audio has to do with the sound quality not technicality.

tmallin,
I own the Lumin X1 and the EtherRegen also! Great units!
Do you turn the EtherRegen off? With my linear power supply I can turn it off at the end of the day. Just wonderin' if it takes time to come back to best sonic state once turned off.

All my equipment in this room stays turned on 24/7. I even keep the streaming going 24/7, just at a low level not audible outside the room when I'm not listening.

tmallin said:
All my equipment in this room stays turned on 24/7. I even keep the streaming going 24/7, just at a low level not audible outside the room when I'm not listening.
Click to expand...

I have the habit of turning everything of. Maybe I should start to leave my system on standby.
You must log in or register to reply here.

Lumin X1: Enabling an Even Simpler Yet Better Sounding System