Over the years I have become very familiar with the Waversa product line and have auditioned or owned most of their equipment at one time. Their approach to digital audio in unique and I have enjoyed watching this technology evolve. One challenge I enjoy is tying quality with affordability and Waversa may have done just this with their new sub-$5000 DAC, the DAC3c (compact). The article below was originally written in Japanese and pulled from the Waversa dealer for most of Asia. www.waversasystems.com. To my understanding, this is a private dealer representing Waversa, which is based in South Korea. With the help of Google translate and further editing including my experience with this dac and their product line, I am re-publishing this summary. If anyone knows of another DAC manufacturer with a similar approach, I would be very interested in learning about them.

Please Note this is not intended to be promotional with the intention for sales. Instead, informational only and learn if other manufacturers also have a similar or unique approach to digital processing.

A different approach to digital processing unique to Waversa and why:

In the case of the Saber ES90x8 series, such FIR filters are basically built-in, and DAC manufacturers can easily perform upsampling. However, in the case of incorrectly made upsampling, the sound becomes thinner, and it is often proved that listening with the upsampling function turned off sounds better.

WaversaSystems uses a proprietary WAP instead of the basic FIR filter included in the DA chip. Waversa Audio Processor (WAP) is designed inhouse with a multi-stage structure including a number of proprietary FIR filters and IIR filters (Infinite Impulse Response Filter) and performs high-resolution upsampling. This high-resolution upsampled signal is processed through thousands of iterative calculations using state-of-the-art source estimation algorithms to reduce digital errors and create a waveform that is as identical as possible to the original analog signal. This is the role of WAP.

Most DAC manufacturers produce modularized DAC components individually arranged and combined allowing for ease of development and production with easy with off-the-shelf chips. As a result, only a few DAC manufacturers have their own signal systems, and DACs of those brands are priced at more than $10,000. WDAC3C is a signal path system specification originally developed by WaversaSystems. All signal processing has been optimized, including a proprietary USB input circuit, network renderer, digital processor and DAC, and is controlled and operated precisely by a clock system unified by a digital processor (WAP). This method has a lower error probability, higher stability, and ideal digital signal processing than the method of circuit design using commercially available modules.

Dual WAP captures all signals In order to dramatically increase processing speed and efficiently manage signal processing. The first WAP (P1) processes all input signals, and the second WAP (P2) receives signals processed by P1 on I2S and decodes signals with clocks according to sampling rates. In this way, by assigning a unique role to each digital processor, signal interference is minimized, more sophisticated clock management is performed, and sound quality benefits from accurate signals that do not compromise digital signal integrity. The heart of WAP lies in signal restoration. 32Bit 1.5 MHz, processing huge information

The WDAC3C does not use the FIR built into the general ES9038, but uses multiple stages of FIR with proprietary logic to perform high-resolution upsampling. Instead, the heart of the technology is included in WAP, and the newly developed WAP has greatly increased the amount of data that can be processed. This new WAP has succeeded its predecessor (24Bit / 368kHz) with 32Bit 1.5MHz data processing. In comparison,16Bit, 65,532 digital signal processes are performed, and in 32Bit, there are 4 billion digital signal processes, and the sophistication of signal processing is dramatically increased. This has made it possible to generate digital signals that are closer to analog, and the subsequent digital restoration technology has become more accurate.

To put it simply, the improved internal processing speed of 32Bit 1.5MHz is similar to upgrading from DVD quality to 4K quality. This dramatically increases the detail and dynamic range that can be expressed.

WAP sounds more natural as you step up WAP's signal restoration algorithm technology increases in sophistication as the numerical value of the calculation accuracy increases. This is managed by WAP Level. WDAC1 has one stage of WAP, WDAC2 has three stages, WDAC3 has five stages, and WDAC3C has nine stages. This WAP is a computation that is processed at the digital stage and can be upgraded by connecting devices.

WCORE and WRouter are WAP level 3, yet when connected to WDAC3C with WAP level 9, a synergistic effect results and the WAP level is measured at 15. The higher the WAP level, the more sophisticated the processing per unit time, and the better the sound image and detail. And the tone of the instruments is also flexible, natural and easy to hear. 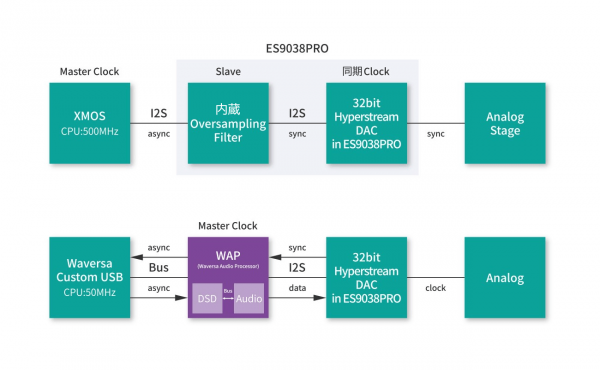 The performance of the DAC chip is also very important for the DAC, but it is not the only one. If DA chip performance is important, all DACs with the same DA chip should sound the same. The choice of a DAC chip is important, but the consequences will depend entirely on how the DAC chip is used. The WDAC3C uses only the most basic functions by bypassing the ES9038PRO and achieves excellent sound quality through original and unique designs for both the input and output sections. Two of them are WAP and WMLET.

WDAC3C has introduced two unique technologies from WaversaSystems to make optimal use of the ES9038PRO with a 32-bit 8-channel DAC.

One is WAP, a source estimation algorithm that operates at 32Bit 1.5MHz. The other is Range Separation Technology (WMLET).

Rather than using the commercially available ES9038PRO chip as it is, WDAC3C has an algorithm that passes the circuits of the input stage and the oversampling filter stage and instead uses the WAP chip to process each process individually. It is then passed on to the ES9038PRO by another key technology, the range channel separation technology (WMLET). Range channel separation technology (WMLET-Waversa Multi-Layer Energy Transfer)

As the name implies, the auditory frequency band is divided into high, mid-high, mid-low, and low bands at the digital stage for each of the left and right channels, and passed through eight channels of ES9038Pro for processing. In conventional signal processing, the energy is concentrated in the middle band due to the characteristics of the analog element. Instead of 8 channels, only the left and right channels will be processed together, and more energy will be concentrated in the mid-band. To prevent this, WDAC3C distributes the energy evenly for each band and improves the sound quality. The advantage of separating the channels for each range using WMLET is that the WDAC3C has an ingenious technology that regulates energy in four channels per frequency band, thus improving distortion caused by energy bias and reviving subtle musical elements, a band balance that cannot be felt with conventional DACs has been realized. This approach to digital processing is unique only to Waversa products. 
Due to the characteristics of network players that use computer networks, DACs are exposed to a large number of high-frequency noises that were not found in conventional CD transport and analog devices, and are adversely affected by sound quality. To minimize these noises, WaversaSystems has developed and produced its own network renderer board. The reason why the renderer board is important in network players is that the network renderer board, which is the entrance of the signal, generates a lot of noise inflow and is not designed for high-end sound quality. WaversaSystems network renderer boards are also designed to apply noise filters to LAN or USB ports, operate at high speeds instantaneously and limit the processing speed to minimize generated noise. 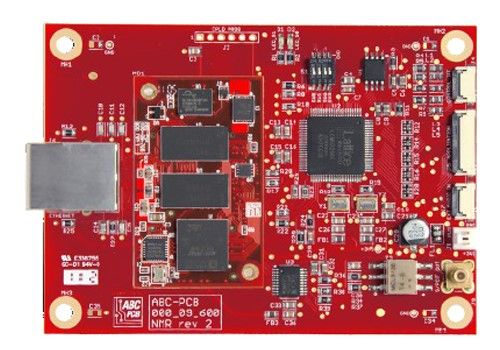 
Receiving, restoring, and playing back network data signals requires high quality and accurate digital design techniques. A technology that filters various noises that exist simultaneously with music signals on the network and is transmitted in the same way, and a technology that protects minute data contained in the sound source signal and has a huge number of elements that combine network, digital, and analog Power must be designed and manufactured with a high degree of perfection in a well-balanced manner. 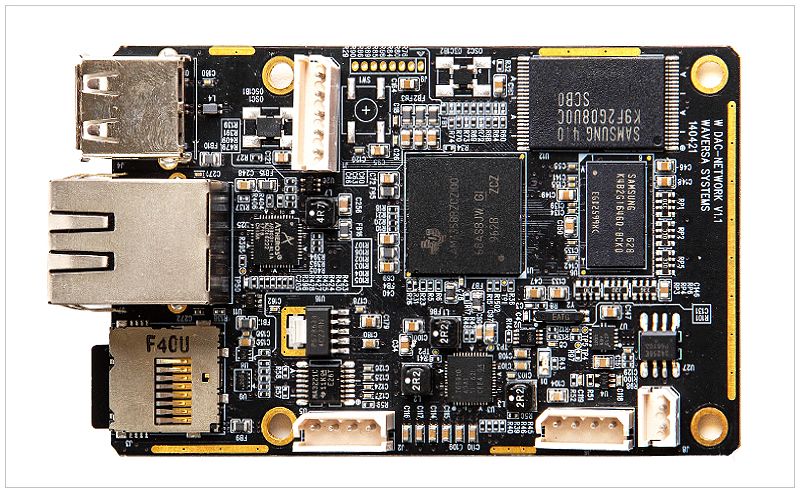 
WNDR is a protocol originally developed by WaversaSystems. The network renderer mentioned above is a hardware advantage of WDAC3C for network audio, and WNDR is a software-like superior sound quality advantage. WNDR is a protocol dedicated to the transfer of pure music with little buffering and has the special advantage that there is almost no noise during signal transmission and no sound quality distortion occurs.


The biggest problem with streaming widely used networks using DLNA is that the standard does not consider continuous audio streaming at all, it is just a standard for packet-based data transmission. In this transmission method, noise is generated during the buffering process during signal transmission resulting in extremely poor sound quality. WNDR is a proprietary protocol developed by WaversaSystems to solve these problems. It has been developed to minimize delays in communication and provide excellent noise immunity. In addition, the WNDR method is a dedicated protocol, so there is no need for a conversion process between protocols, and sound quality can be improved. In addition, WNDR is a more advanced protocol than other protocols and is more immune to noise.


There is also a dispute over how noise is generated in network protocols. On a common shared network, data is not transmitted in a dedicated (exclusive) manner, so it uses a method of moving on a shared network in packet units and buffering the data in packet units. Noise is induced in the process of reading this buffered data. 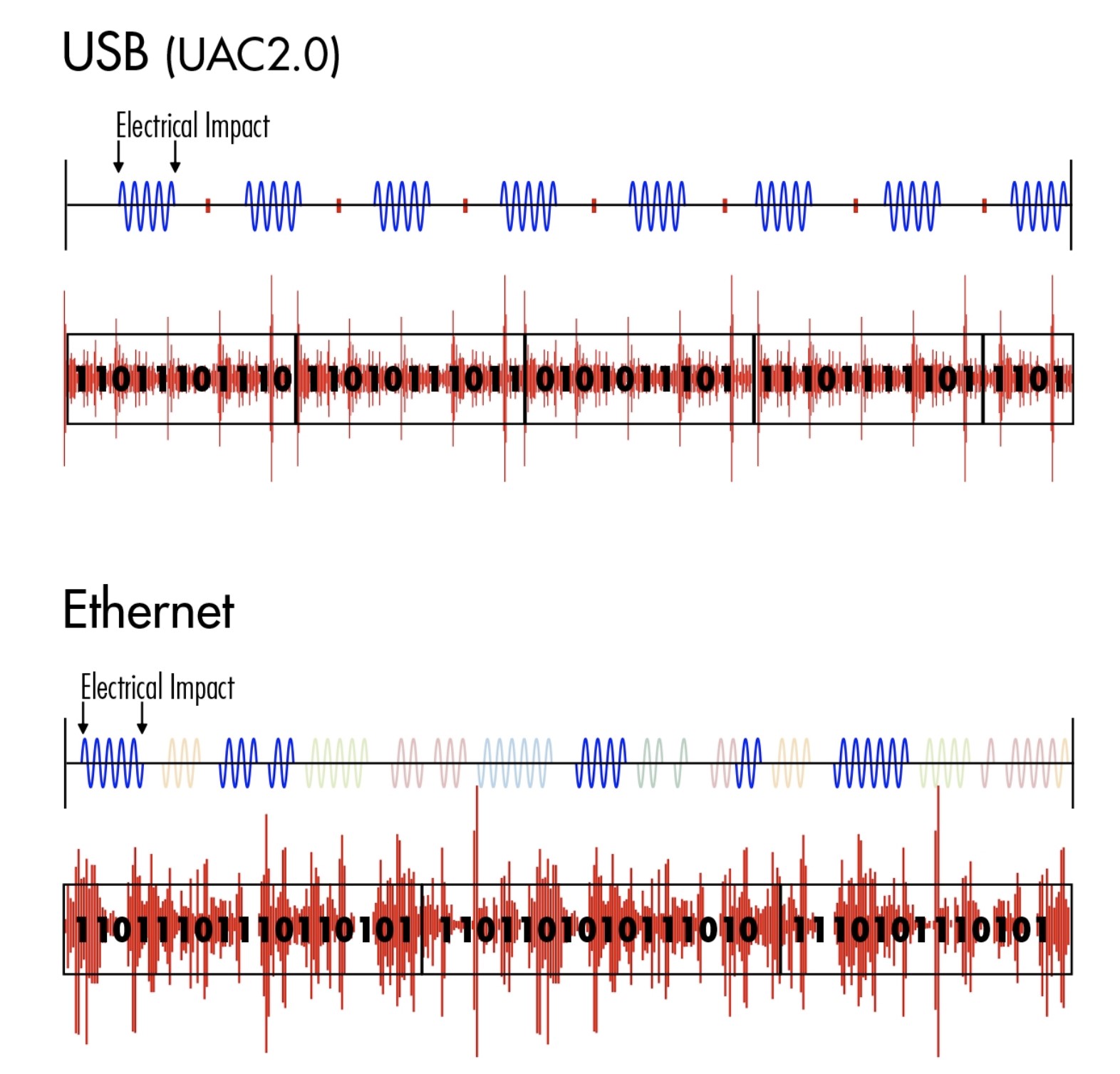 When reading buffered data as shown in the figure, the process of reading and transmitting data with a renderer board or the like occurs intermittently, which causes electrical noise. The stable transfer of continuous information without buffering will be the core technology of the future, and since media integration tends to be parallel to communication, stable clock synchronization without buffering will be achieved. The technology that does this is WNDR, which is a great sound quality advantage. You can tell if there is buffering by unplugging the network cable.

WNDR, which operates with WaversaSystems DAC, is the only product in the world that operates with a proprietary music data transfer protocol. WNDR produces a synergistic effect when all devices are integrated, and combines with WAP to achieve even better sound quality. When WCORE, WRouter, and WDAC3C are all connected by WNDR as shown in the figure, they will have clear sound quality benefits. In addition to that, it has been raised to the WAP level, achieving higher-end sound quality with higher dimensions.

This dac is the newest of their product line and the culmination of years of innovation where the trickle-down theory actually outperforms the rest. My impression: the DAC3c performs better than its big brother and on par with their current flagship dac, if not better.
Last edited: Jan 5, 2020
Kevalin Audio, LLC
Represents Allnic Electronics, Allnic ZL Technologies Cables and Waversa Systems Digital Audio
Likes: audio.bill and paul79
You must log in or register to reply here.
Share: Facebook Twitter Google+ Reddit Pinterest Tumblr WhatsApp Email Link