As a general rule; you can design a cable for either low inductance or low capacitance but you can't have both in the same cable. This cable comes about as close to cheating that rule as any I've seen. I built a pair to drive my ESL speakers. Enjoy!

A quote by the cable's designer, Jon Risch:
“Cross-connection is used to reduce the inductance to an absolute minimum. Merely paralleling the center wire and shield would create two separated different polarity composite conductors with an inductance much higher than the cross-connected pair.” 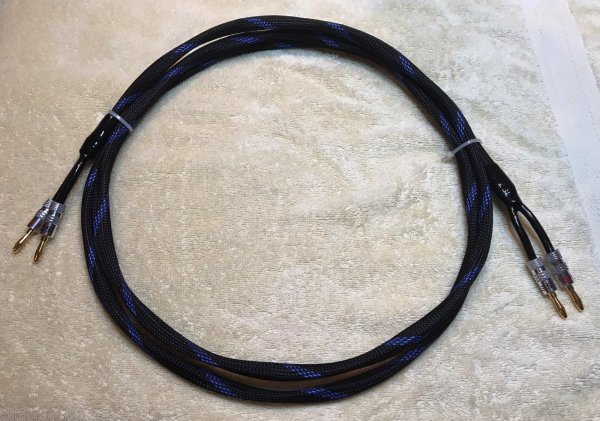 Hi Charlie;
These appear to be a diy version of a commercially available $600+ speaker cable designed specifically for ESL speakers. The real question is, can you detect any sonic difference with these in use vs what you had before?
Reactions: Folsom

That is the question. I tried this and was meh for me.
Toggle signature
Industry Affiliation: Folsom
J

Hi: What kind of speakers are you using? Thanks

When I tried it was over a decade ago I think. I had some fullrange something I had crafted.
Toggle signature
Industry Affiliation: Folsom
J

Janek36 said:
Hi Charlie;
These appear to be a diy version of a commercially available $600+ speaker cable designed specifically for ESL speakers. The real question is, can you detect any sonic difference with these in use vs what you had before?
Click to expand...

The cables I was using before were also DIY cables, except they used Mogami coax cable with the stranded spiral wound shield conductor; which I believe is the very same cable used in the $600 ESL speaker cables sold by Inner Sound. Those cables sounded just fine, as do my new cross-connected coax cables.
Honestly; I don’t know that I could tell the two cables apart in a listening test, even if I could switch between them rapidly, which I’m not setup to do.
ESLs are said to be more affected by different cable configurations because even a small increase in the cable inductance adds to the transformer’s leakage inductance, which affects an ESL’s characteristic high frequency response peak and coincident impedance minimum. The Mogami cables have ultra-low inductance, but at the expense of also having very high capacitance.
I opted to build the cross connected coax cables because the inductance/capacitance mix claimed by the designer seemed to be a uniquely better compromise between the two extremes, as compared to the published specs for other cables I looked at.
Actually; I’m one of those guys who always believed that high dollar cables offer no significant benefit over lamp cord of similar gauge and resistance—I just like tinkering and building things and the cross connected cables peaked my curiosity so I built them. My advice to others is to invest in speakers and amps first, and then play with cables if you want to.
J

Janek36 said:
Hi: What kind of speakers are you using? Thanks
Click to expand...

Its my understanding that this type of cable is specifically useful for ESLs and may not be of any meaningful value in other types of speakers. So knowing the type of speaker in use is important. I also suspect that length of cable may also matter. One way around the problem is to mount the amplifier on the ESL with very short speaker leads.
You must log in or register to reply here.

MIT cables: the details - excerpts from Brisson interview on Dagogo