Yes, thanks for the file, Ray. It looks pretty much like the one for my ECM-8000, as well as other ECMs I’ve seen.

Fitz, do you have any other mics to reference for us? When you said the measurement-mic calibration curves you’d seen were virtually the same for 0° and 90° I was hoping you had info on some of the more uncommon mics we don’t see much of, like Earthworks, dbx, etc.

As it is, with the UMIK, ECM8000 and similar mics, I just can’t hang with the idea that a deviation between the two of 5 dB or more @ 12 kHz is of no consequence, so I’m sticking with my previous statements.

A case in point, there’s a guy at HT Shack who posted measurements from his room with 0° and 90° measurements, each with the appropriate calibration file in place, and got noticeably different results in the high frequencies. The graphs are below. He claimed to be using a USB mic from Cross Spectrum, although I’m not sure which one (probably a UMIK-1 or Dayton UMM-6). Note that the 90° measurement does not show the “droop” in response above 2 kHz that the 0° graph does, which most assuredly shows the how ceiling reflections can be artificially boosted by the 90° calibration file. When I questioned him as to which he felt was the better representation of what he was actually hearing, he picked the 0° graph, saying he felt the highs from his speakers were on the “soft” side.

I won’t say this is a common occurrence – I honestly don’t know if it is or not, but the fact is, it can indeed happen. That’s why I like to stay with 0° measurements. There’s no “maybe” with them, you know what you’re getting.

Wayne - thanks for that. I can see the possible problem. I have not found the original posts in that thread. I suspect, though, that all he did was to flip the mike from straight up to horizontal with the same positioning of the mike tripod and boom. With something like the UMIK-1, that would cause the mike diaphragm to shift by about 6" or so down and also forward of the tripod, in addition to the angular orientation. I am not saying that this new point in space causes all the difference we see in his measurements because of the altered geometric position. It could well be that the 0degree incidence from the speakers is more accurate, even after cal file correction. But, I do not think that has been proven conclusively.

For me, though, it really doesn't matter. I am a Mch guy. So, I do not have a choice. I must do my calibration with the mike straight up using the 90 degree mike cal file. I still have my ears and manual target curve adjustments to fix anything that seems out of line. So far, I have not felt the need for that.
J

CherylJosie said:
$ Use your sound card to tweak the frequency response of your measurement microphone and fool your 'flat' budget EQ into a new default curve.

For example, the Harman curve seems to have about 3dB per decade of lowpass-ish treble rolloff between 20Hz and 20KHz. Invert that to 3dB per decade of highpass-ish bass rolloff in the microphone's signal path, and normalize to unity gain at 600Hz. When the room EQ is done with its auto calibration, the resulting room EQ curve will look very much like Harman's.
Click to expand...

I've read your post so many times. I know it's an old post, but I am in the same position. I do not like the Audyssey curve. I plan on attempting your method using a MiniDSP 2x4 to load the target curve(s).

Your approach was very logical, but I think there was one tiny error that might have made a huge difference.

This is the curve I got from Audyssey. I am very much interested in finding out what the harmon curve would look like. I did read
Of course I do not understand 90 percent of what is discussed but using this graph.. I would like to experiment and see what it will sound like. Please be patient with me. 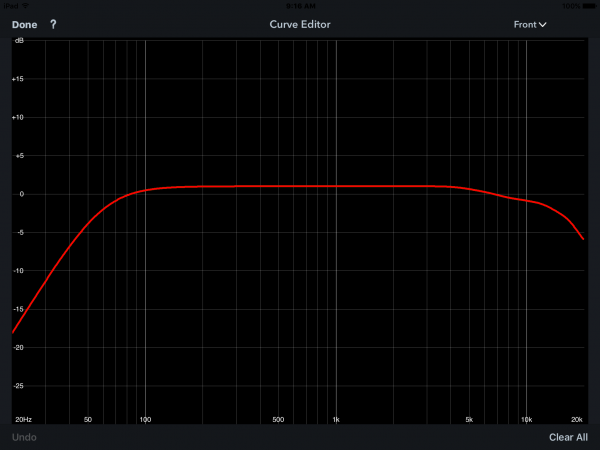 TAD micro evolution one vs. other nice speakers? Your comments?

A Tale or Three Phono Stages