One source of hum in systems (at least in days gone by) was grounding problems in the cable TV feed. When stereos began to become "home theater" systems doing double duty for video and audio entertainment, such hum problems frequently arose. For reasons not entirely clear to me (perhaps greater use of fiber transmission lines by cable service providers?) this problem is now a distant memory, at least at my homes in the past 15 years or so.

The sure cure in my experience for those cable-TV-induced hum problems was a unit like the Mondial MAGIC. Remember those? 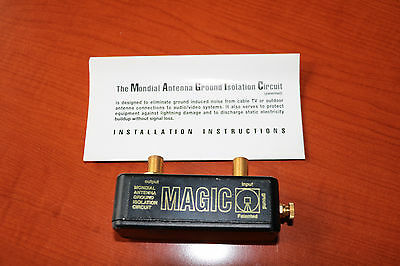 Other hum problems these days even in systems not having phono stages or cable TV connections can be caused by mechanical buzzing of transformers within electronics and particularly active subwoofers. This hum doesn't come through the speakers, but is just radiated into the room from the transformers themselves. The last time I encountered that type of hum problem was with the transformers of the Dayton Audio SA-1000 subwoofer amps which were part of the Audiokinesis Swarm system in my current audio room. The instant and total cure for that problem was the Audio by Van Alstine Humdinger. At least some models (the ones I owned for a couple of years at least 15 years ago) of the PS Audio Power Plants also caused transformers in some, not all, audio equipment to hum/buzz when the supposedly performance enhancing Multiwave function was engaged.

The AVA Humdinger device is advertised to work with both toroid and non-toroid transformers. See https://avahifi.com/collections/used-demo-and-quick-ship/products/humdinger-dc-line-blocker

However, my successful experience with the unit was limited to the


Dayton Audio SA1000 Subwoofer Amplifier which is advertised to have a toroidal transformer. See the descriptive video at https://www.parts-express.com/Dayton-Audio-SA1000-Subwoofer-Amplifier-Rack-Mountable-300-811​

What I'm concerned about is hum and noise audible either from the electronics boxes themselves (as from mechanically buzzing transformers) or through the loudspeaker drivers when no music is present (what I've called quiescent noise) but the system is powered up. Simple, relatively low-cost devices can easily eliminate the mechanical transformer buzzing.

Electronic hum, buzz, hiss or other spurious noises heard through the speaker drivers when no music is playing is different and is not, in my experience, much alleviated by devices like the AVA Humdinger. Such electronic noise would seem to create a limit on the best sound-to-noise+distortion the system can muster.

Certainly one can argue that such noise is irrelevant if it cannot be directly heard in a quiet listening room from the listening position. However, it subjectively seemed to me that one of the benefits of Benchmark electronics was seemingly quieter backgrounds on all music. With Benchmark electronics doing the DAC, preamp, and amp work, there has been absolutely no quiescent noise (hum, hiss, or other) audible from any of the speaker drivers at any setting of the volume control with my ear nearly pinned to the drivers in a quiet room.

This is not a feat most systems in my listening rooms over the decades can manage. At its worst, such quiescent noise can be audible outside the listening room. Two examples of that included an all-analog phono-playback system back in the 1980s with a Marcoff pre-preamp with low output Fidelity Research moving coil cartridge and a thoroughly modern digital system built around the Sanders electronics and 10C speakers about ten years ago.

Most of my systems have managed to be noise free or almost noise free as heard even from a relatively near-field listening position, even though hum and/or hiss is clearly audible from the drivers from closer up, such as within a foot or less of the drivers in a quiet room. The active Janszen (with gain structure of the system adjusted for best S/N) and my current D&D 8c speakers with their associated components fall into that category. In most cases with modern digital sources, the primary cause of such noise seems to be in the amplification stage since almost the same amount of noise is audible from the speakers even if electronics upstream of the amplifier are physically disconnected from the amplifier and turned off.

The only powerline products I've noticed making a real difference on such quiescent electronic noise is the Multiwave function of PS Audio power regenerators and not in a good way. Not only will engaging Multiwave cause many normally quiet transformers to mechanically buzz, it also often causes a change in the quality of the residual hum heard through the speaker drivers, inducing a higher frequency "whine" noise added to or partly replacing the usual primarily 60 or 120 Hz hum.
Reactions: RogerD
You must log in or register to reply here.