A Huge Shout Out To Some Audiophile Friends

You are using an out of date browser. It may not display this or other websites correctly.
You should upgrade or use an alternative browser.
I have found throughout my life that some of my best and longest friendships have come from meeting fellow audiophiles. Yesterday was just one of those days. I have been friends with Damon Von Schweikert and Leif Swanson for many years. I have travelled to their factory many times and listened to many of their new speakers before they were even released. We've gotten together many times over the years both socially as well as to listen to music at either my house or their houses.

With the pandemic although it seems like yesterday, I hadn't seen Damon and Leif for well over two years. We reacquainted 3 weeks ago when I hosted the global soft launch of the new Lampizator Horizon.It was terrific to see them and at the end of the day, both were excited about the Horizon and wanted to return after the Florida Audio Show for a more in depth listen

Shortly after the show, Damon called and we set yesterday for a fun day of listening. WE listened for a few hours and then we began to talk system set up. As I have alluded to many times over the past year my room and listening postion, listening chair and upper module settings have all changed to find a perfect Wilson algorithm that would be advantageous to my speaker position and listening position.

It's always an advantage to have 2 speaker designers in your room offering suggestions. Plus it was actually very engaging working on my Wilson speakers with Von Schweikert designers. I learned a lot over the next few hours. We searched the user manual for the closest algorithm consistent with my sitting location and remeasured with laser light. Much to our amazement the laser measurements were slightly longer than those I had taken when I changed my chair as well as listening position. For those familiar with Wilson set up these new measurements allowed me to use a different rear spike on my lower mid range module as well as several spike position changes. All of this helped to achieve better time alignment with all 3 upper modules. I probably would have stoped there and accepted the new sound but Damon and Leif wanted to try a few other things.

Last year when I changed things around and added Center Stage LS footers under my speakers the speakers measured level in all 3 planes. We got out my level and remeasured and interestingly the level showed that there was a 1/16 bubble shift to the right on each speaker almost certainly from settling. This seemed almost insignificant to me and I probably would have left them. However Damon and Leif got down on their knees and adjusted the saucers upon which the LS feet stood. Once everything was level in all 3 places we listened to the same songs and I was stunned how such a little change in speaker level could achieve such a dramatic improvement in sound.

I also discovered from Leif and Damon that a good way to evaluate speaker set up is to play music which is recorded in Q sound as you can hear the sound stage shifting from one side to the other rather than sound coming from each speaker. We played a lot of Madonna and Roger Waters as we tried to fine tune the upper modules settings.

When all was said and done Leif had some special measuring devices to check that each driver was aligned perfectly with the others such that we could say we have correct time alignment. Leif however was concerned that even though we were using the newly discovered measurements and resultant settings as in the users manual that the upper mid range module was not time aligned with the other 2 drivers. Then came the magic as further experimentation done by Leif resulted in moving the upper module backwards many, many spike positions until his laser measurement showed all three drivers to be perfectly aligned. I was not prepared for what I heard, There was now much more perfect imaging, more correct timbre and tonal balance and there was a slight downward shift of the voices to more normal heights. I was stoked to say the least, as we had basically just created a new algorithm for my speaker upper modules.

I thought we were done .....but there was one more thing left to be done. Several years ago it was Leif and Damon who convinced me to move my sitting position forward. I did do this eventually and thought all was good. However some months later DDK paid me a visit to help with the set up of my VDH MSS cartridge. Once done we played music and as we did such, David walked around my room and suddenly sat on the floor and said"this is the spot where your room is taken entirely out of the equation. I pointed this out to Damon and Leif who both wanted to explore this as we were sitting all of 4 inches behind where David suggested we should be sitting. WE moved the seat forward the 4 inches and Leif was sitting in that spot when we played all of the same music and Leif's eyes lit up and said "we're done.....this is fantastic"

After they left I was glued to my chair for a lengthy listening session. Everything sounded much better than when we started. The songs with Q sound started outside the one speaker and extended right across the entire sound stage without hearing either speaker

I wanted to start this thread to give a big shout out and thank you to Leif and Damon who changed my speakers' upper modules based on laser positioning rather than using the Wilson algorithm measurements and had the perseverance to do things which I would never have considered. I am listening now in quite a forward position which allows for first reflections to be so much better. Remarkably the position upon which we settled was the exact position DDK told me when he visited.

It's great to have such knowledgeable people giving suggestions and our experiments bringing us to a totally new and never seen algorithm for the upper modules. I would never have had the knowledge they had to suggest what they did to the upper mid range module on my speakers. Thanks again Damon and Leif for spending the day yesterday as the rewards were simply unexpected 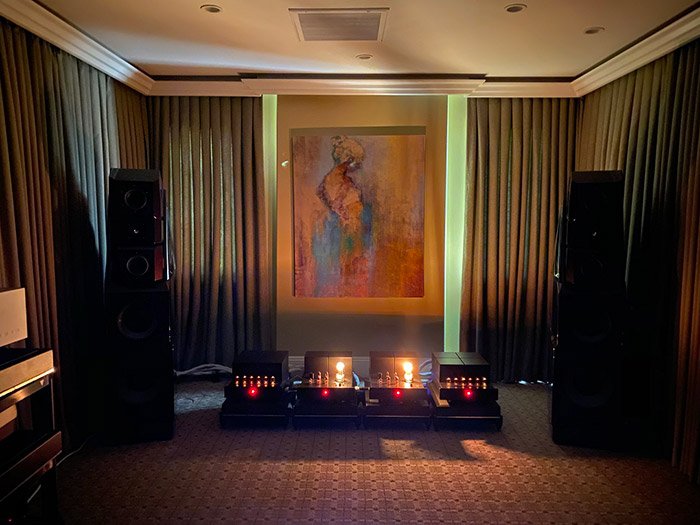 Site Founder, Site Owner, Administrator · From Coto De Caza, California, south golf course
Site Founder, Co-owner and Administrator of What's Best Forum. A graduate of The University Of Toronto and practiced Ob/Gyn in Toronto from 1973 until 1978 when I relocated to Southern California in 1978 and ultimately to Northern California in 1993. Now retired after 35 years of active practice in Ob/Gyn and am back in SoCal on the 13th fairway of Coto De Caza's south course.

music, photography, travel, film and theater.
This past week I had the pleasure of spending an afternoon listening to Steve's system. My first exposure to hearing the system was at the Lampizator Horizon event WBF hosted earlier in the year (and before the set-up changes by the boys from VSA were completed). At the event, I was initially seated toward the back of the room, then later at the very front in the then designated "sweet spot". At the time, I remarked to Steve that I preferred the far-field location to the near-field one, so naturally when Steve informed me Lief and Damon had moved the sweet spot even closer to the speakers needless to say I was skeptical.

As we sat down to listen to the new set-up, Steve explained in greater detail the changes Leif and Damon made to Wilson's set-up and asked if he could play a number of his reference tracks so I could acclimate my ears to the new speaker set-up and listening position, as well as some tube updates he had made to the Horizon.

I'll admit to not being a fan of nearfield set-ups with large floor-standing speakers ala the Wilson's or for that matter most digital gear, however this time in Steve's room the results were absolutely stunning! Within the various mixes we listened to instruments were placed in their own distinct space with lots of air around them (and dare I say) the tone was extremely analog-like but presented with greater dynamic range. All in all, this was the most engaging, best digital sound I have had the pleasure of experiencing. Needless to say, I have not heard the Wadax so cannot compare. That said, those WBF members attending the Axpona show this weekend should make the Lampizator room a must-stop destination.
Reactions: Willgolf, PeterA, Leif S and 1 other person

Alrainbow said:
Steve a great post
a while back I was lucky to go to an event in jersey
im sorry I can’t recall the name of the audio dealer
he was a great guy and had a great room to demo audio.
The setup was gensis audio Gary koh ran things
like your buds he is really knows how to set things up as well.
He did a demo where he turned a tiny Allen screw a half turn might have been a 1/4 turn not sure.
Just the two front footers
this changed the alignment of the drivers on top of each speaker
played same song
like you it was amazing how it changed the sound
made vocals change tone
it was a big wow moment for me.
gary really really knows not just how to make great speakers like wam and von speakers but more importantly how to set them up.
lastly I’m very glad I own large line source speakers lol. they may not be perfect in setup but do give me a lot of places to listen in
even from the area behind them hahahah.
some 16 open space behind them.
Click to expand...

Nope not GTT. The Genesis dealer referenced was Distinctive Stereo in River Vale NJ run by Larry Borden. He appears to like dipoles and carry's some cool stuff in addition to Genesis such as Sanders, Muraudio, and an omni design from German Physics. Probably well worth a visit if you are in the NY Metropolitan area.
Reactions: Steve Williams and Gregadd
Good read and agree with speaker adjustments, good is not great, it's a relentless pursuit, and better to have a minimum of one extra person to help.
Reactions: Steve Williams
Steve
In a way, you are lucky to have these resources available to you. I would love to be able to have a professional industry expert come to my house without trying to sell me more equipment.

Steve Williams said:
I still have that amp stand for you
Click to expand...

How much do you think it weighs?
These threads bother me.. I have to push one speaker back about 6 inches every night or its a little in front of the TV when either of us is on the sofa. Its really hard to get back to the magic spot. I know every listening session is sub prime. Enjoyable, but I know it can be a lot better. And then I read this thread and it drives home the importance of the room, speaker and setup.

Congratulations on getting you system dialed in to a place you like Steve. I bet most people never get there. Most probably don't even know they are not there yet.
Reactions: Willgolf
You must log in or register to reply here.

Any song recommendations for testing purposes?