KS Park who is the lead designer and owner of Allnic Audio developed a cable company, ZL Technologies.

It makes sense to place a new thread here for introduction to N. American markets.

I personally have had a very long journey in the cable world with some good investments and some horrible ones. These cables are worth your attention. While this review stated great benefit with one cable. This becomes vastly understated when you replace all the cables in your system. The more I purchased the deeper the discount I was offered by David Beetles of Hammertone.

I thought this review was an easy read and direct. My understanding there are more to follow and I will post them here.

I have one to offer to try if interested, but Hammertone offers a no risk purchase - just return in a resealable condition.

Additional lengths are of nominal costs. 33' unbalanced cable was custom made and fortunately not sold on a per meter basis, unlike Antipodes Reference. These cables are better and selling a 5 meter cable (maximal length by Antipodes) has proved difficult.

I strongly recommend auditioning them. The power cables are fantastic. I will trial some speaker cables in the coming months.

After much dialog with David Beetles and Kang Su, my conclusion is that ZL5000 vs ZL 3000 cables are identical except for the gauge of the wire. The rule is for low current demand use the smaller gauge ZL3000. However, this rule in my estimation has been debunked. High current linear power supplies for source components is essential to reduce jitter and meet the demands for optimal signal presentation. I challenged both of them to a comparison and another person who also has replaced his cabling across all his systems with ZL. They had an eye opening moment. The consumer who I modeled my system from in 2012. Sold off all his ZL3000 for the 5000 series. The cable is much stiffer but manageable. My wife is more OCD than I am. She re-laid my cables maintaining my one rule that signal cables are above power cords. While stiff, it is doable.

Background: I have horrible electrical power in part due to the tech neighborhood I live in (Nike and Intel Exec) and the switch power supplies in my house played havoc on my system. I installed a Torus 75a isolation transformer and ran dedicated lines. Tore the darn house apart in the process. The wife was pissed. I have dedicated lines to each Amp, Pre, and source components feed off a Audience Adept Response TSSD 12. I replaced my au24sx power cable with the ZL5000 to a Neutrik adapter. The improvement was not subtle, particularly in the detail of music presentation. I had more spatial clarity and hear level of detail in my music that was not there before. ZL cables are welded. Once they can do this process to a Neutrik I will replace the cable without an adaptor.

These cables across the product line have done a tremendous job at removing RF pollution which I still struggles with despite the isolation transformer. LED lighting and Dimer switches. Between my rack and amps, in the corner is a gas stove. The fan when clicking on and off would create a pop in my speakers. More so with the 99 dB effeciency. The pop was loud. Even tried at the advice of Steve Nugent at Empirical, place a capacitor between the hot and neutral of the motor ac plug to no effect. These cables silenced this. Only if I place my ear to the speaker I can hear a faint pop. It is effectively gone a 1' from the speaker, vs being significantly annoying.

From another customer that posted on Audioshark: "Not only did the system get quieter with the power cable but the bass is more taut and textured. Sense of space is better. I'm also hearing micro details that I've never heard before on well known albums, even when previously played with higher priced components in former systems. Overall, one of the better upgrades I have done $ for $. "

Thank you for telling us about these new ZL Technologies cables! I am happy for you that they solved your noise problem!
Toggle signature
Mono and Stereo - Senior Contributing Reviewer

From a recommendation, I picked up a cable cooker from a friend used and I am impressed with the results. Impressed is an understatement. Previously I was a skeptic and never believed in these devices. I am ordering some speaker cable and complete my loom. I can say without question these topped my Antipodes reference cables which themselves topped the Ultimate Reference by High Fidelity. Below are the review links that I am aware of to date. Many of these came out in recent months: 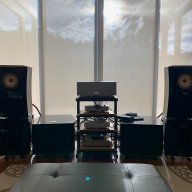 Thanks for sharing. Were you using High Fidelity AC Power Cables previously?
If so. which one?
Can you please share your system details.

TotalDac12, Allnic L10,000 OTL/OCL with Kron 300b, Allnic 311 monoblock, OSRAM PX25 and U52 from 1937. Some rare earth 12au7 and E810F, respectively. Feeding into Daedalus Zeus. All fed from a 75A wall mount Torus isolation transformer with equal length internal cable to each component. (Then partner blew a gasket when I tore out all the drywall on the main, part of the wood floor and most of the drywall ceiling below) When all done, looks like no one ventured anywhere.

My understanding from David Beetles, one other person sold off their HF-UR loom for these cables at a relative fraction of price. Hammertone has demo cable. Compare and decide for yourself. Regarding my signal cable: HF-UR was replaced by Antipodes Reference then to ZL Technology. At each step, there was no comparison. The power cable was a mix. While I once had a UR loom, I only had two UR power cables in the mix. Too darn expensive even at 50% off. My buyer was happy to get them!!!

The difference for me, clarity and layering that I have not experienced with the HF-UR. To help understand where my preferences lay, I was more emotional with Audience AU24sx than High Fidelity. Audience to me is very visceral, like my more reminiscent lovers from years past.

Here is another review that came out last week I just came across.

I have completed my loom in my personal system with these cables and have no regrets.

For those interested, I was entrusted with a small library of cable to loan out from their distributor, David Beetles at Hammertone Audio. Due to the new import law, which will remain in flux for the foreseeable future, I was asked to become a librarian of this catalog of cable. This applies to US audiophiles. I can set up a second tour for Canadian audiophiles too if interests is there.

I would like to start with the best sellers and what were the most impressive in my system. In one tour would be Allnic ZL5000 speaker cable 3M spade terminated. Second tour would be 3 cable set of ZL5000 power cords. Feel free to PM me if you would like to see what these cables offer.

I have other cable to lend out to on individual basis should interest arise.

I am looking for speaker cables. I originally thinking of Tellurium q Statement. However after I read reviews about ZL5000. Now not sure which one I should get.
P

blackpolice,
I am a happy user of the ZL speaker cables, and can say with no reservation, these are very special cables. Trying many different speaker cables in my system only ever made small differences, give, take, that sort of thing. Once I installed the ZL cables, my system opened up in ways I never thought possible. I recommend you chat with Ketcham about getting a set of these.
Toggle signature
www.manymoonsaudio.com

blackpolice said:
I am looking for speaker cables. I originally thinking of Tellurium q Statement. However after I read reviews about ZL5000. Now not sure which one I should get.
Click to expand...

blackpolice, PM me if you are interested in trialing some cable.
Toggle signature
Kevalin Audio, LLC
Represents Allnic Electronics, Allnic ZL Technologies Cables and Waversa Systems Digital Audio and Network Solutions.
Dealer Sponsor of What's Best Forum.
You must log in or register to reply here.