A long time ago, in two galaxies about 900 million light-years away, two black holes each gobbled up their neutron star companions, triggering gravitational waves that finally hit Earth in January 2020.

Discovered by an international team of astrophysicists including Northwestern University researchers, two events—detected just 10 days apart—mark the first-ever detection of a black hole merging with a neutron star. The findings will enable researchers to draw the first conclusions about the origins of these rare binary systems and how often they merge.
The team observed the two new gravitational-wave events—dubbed GW200105 and GW200115—on Jan. 5, 2020, and Jan. 15, 2020, during the second half of the LIGO and Virgo detectors third observing run, called O3b. Although multiple observatories carried out several follow-up observations, none observed light from either event, consistent with the measured masses and distances.

"Following the tantalizing discovery, announced in June 2020, of a black-hole merger with a mystery object, which may be the most massive neutron star known, it is exciting also to have the detection of clearly identified mixed mergers, as predicted by our theoretical models for decades now," Kalogera said. "Quantitatively matching the rate constraints and properties for all three population types will be a powerful way to answer the foundational questions of origins."

All three large detectors (both LIGO instruments and the Virgo instrument) detected GW200115, which resulted from the merger of a 6-solar mass black hole with a 1.5-solar mass neutron star, roughly 1 billion light-years from Earth. With observations of the three widely separated detectors on Earth, the direction to the waves' origin can be determined to a part of the sky equivalent to the area covered by 2,900 full moons.

Just 10 days earlier, LIGO detected a strong signal from GW200105, using just one detector while the other was temporarily offline. While Virgo also was observing, the signal was too quiet in its data for Virgo to help detect it. From the gravitational waves, the astronomers inferred that the signal was caused by a 9-solar mass black hole colliding with a 1.9-solar mass compact object, which they ultimately concluded was a neutron star. This merger happened at a distance of about 900 million light-years from Earth.

Because the signal was strong in only one detector, the astronomers could not precisely determine the direction of the waves' origin. Although the signal was too quiet for Virgo to confirm its detection, its data did help narrow down the source's potential location to about 17% of the entire sky, which is equivalent to the area covered by 34,000 full moons. 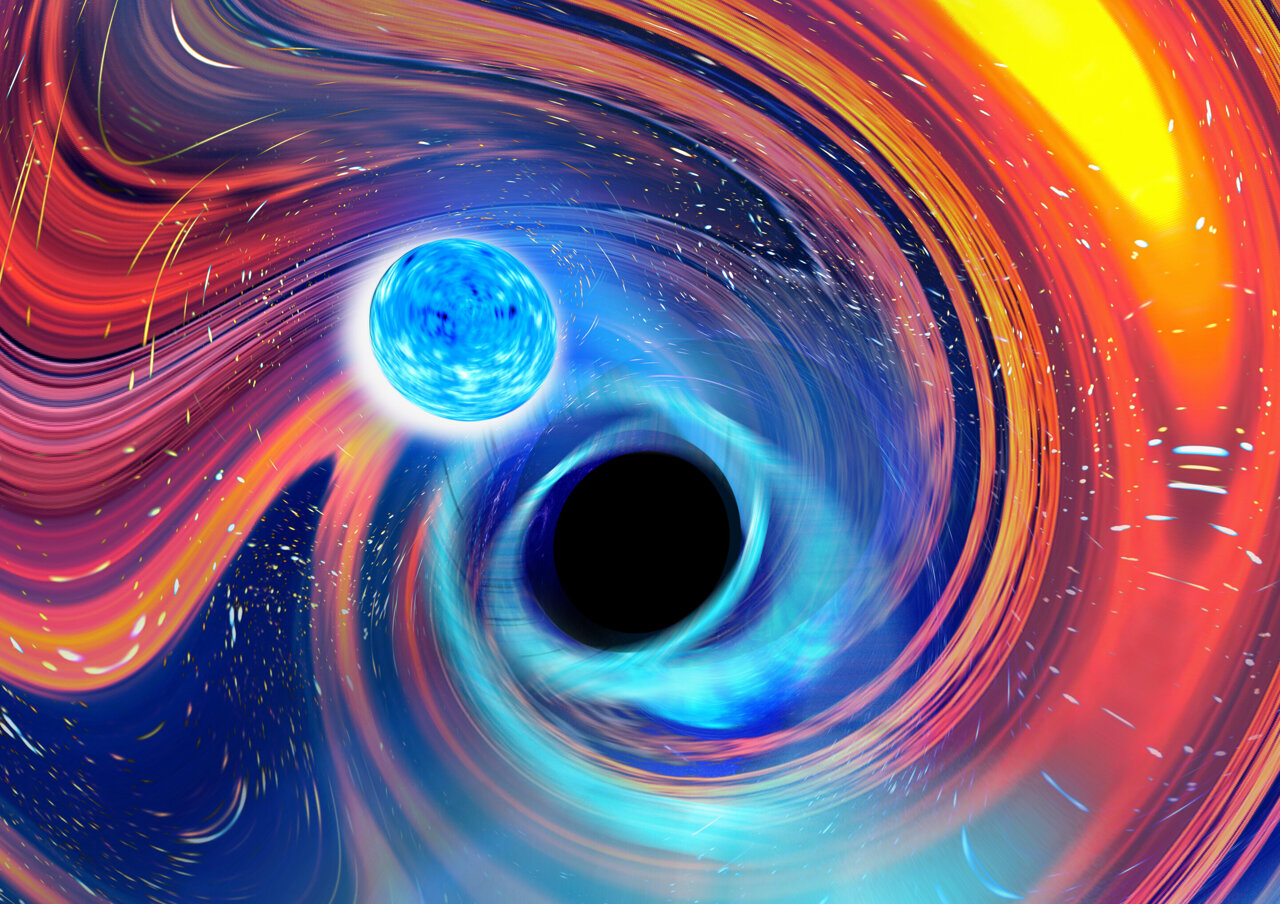 A long time ago, in two galaxies about 900 million light-years away, two black holes each gobbled up their neutron star companions, triggering gravitational waves that finally hit Earth in January 2020.

For the first time, scientists have unambiguously confirmed the collision of a black hole and a neutron star: The fateful moment two extreme objects come together in an event so immensely powerful, its ripples across the cosmos can still be discerned

Very interesting observations. The rule in stellar evolution is that the more massive a star is, the faster it burns through its fuel to reach the end stage of its life. So if there are two pretty massive stars, and the more massive one is big enough to become a black hole, that is the one that should go to that stage first. Since the mass doesn't change (much) the less massive star (around 1.5 to 2 solar masses) would find itself revolving around a black hole. Then it would become a neutron star and could spiral into the black hole - causing the collision that has been observed. The fact that two such events were detected within a relatively short period of time, suggests that they should be pretty common. The detection of these gravitational waves means the new detectors appear to be sensitive enough to capture these events. I remember back when I was a grad student, a professor at the University of Maryland, Joe Weber, designed the first gravitational wave detectors, a pair of massive suspended steel bars located in different parts of the US, which should vibrate if there was a strong enough gravitational wave hitting them. Nothing was detected (although Weber claimed he detected some events). Fast forward to 1993 and 2017 and there have been two Nobel Prizes awarded for the first indirect, and then direct observations of gravitational waves. Because these are not traditional telescopes, where the event is coming from cannot be easily detected. So another one or more instrument should be detecting the same event, and the position can be triangulated. Sort of like an earthquake, where the origin of the quake (somewhere below the earth's surface) can best be determined by observations from different locations.

Astronomers witnessed the last 500 orbits before the neutron stars were swallowed, a process that took far less than a minute and briefly generated as much energy as all the visible light in the observable universe.

“It was just a big quick (gulp), gone,” said study co-author Patrick Brady, an astrophysicist at the University of Wisconsin Milwaukee. The black hole “gets a nice dinner of a neutron star and makes itself just a little bit more massive.” 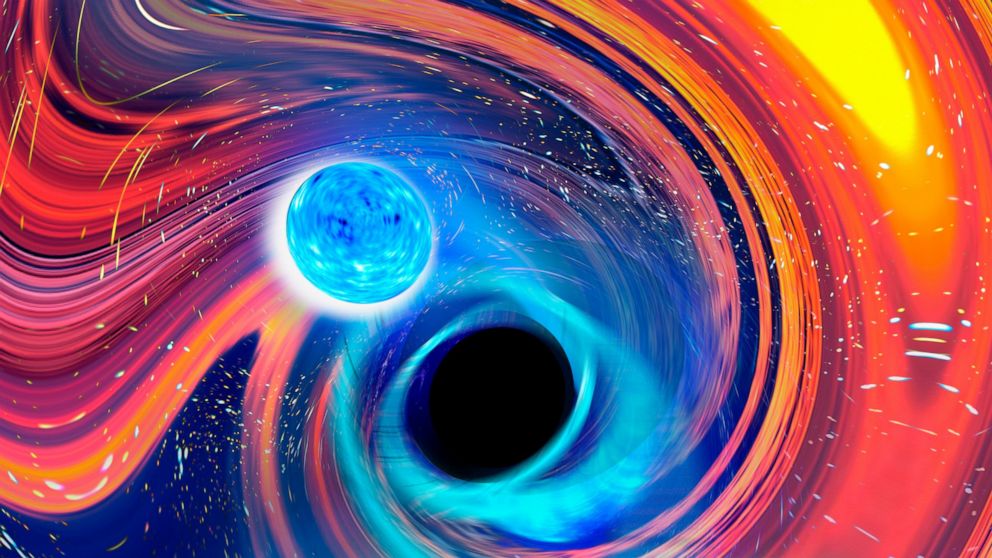 Astronomers say they've witnessed for the first time a black hole swallowing a neutron star, the densest object in the universe

Our Galaxy and The Cosmos-To Infinity And Beyond Apr 22, 2021
ack

Our Galaxy and The Cosmos-To Infinity And Beyond Sep 3, 2020
ack

Kilonova: An enormous burst of gamma rays unleashed more energy in a half-second than the sun will produce over its entire 10-billion-year lifetime

Our Galaxy and The Cosmos-To Infinity And Beyond Nov 13, 2020
ack

Over 100 black holes in the Palomar 5 star cluster

Our Galaxy and The Cosmos-To Infinity And Beyond Jul 7, 2021
Addicted to hifi

Eject the black hole? Maybe somebody had too much wine?

Our Galaxy and The Cosmos-To Infinity And Beyond Aug 22, 2021
Addicted to hifi