a couple of months ago I got turned on to the late 70's French classical label "Sarastro".

Sarastro was a character in Mozart's 'The Magic Flute". every Sarastro pressing is classical, mostly solo or small combo, and all are 45rpm. they are all quite wonderful sounding and lovingly and minimally recorded. I'd call the tonal balance of these pressings natural and even slightly 'sweet'; certainly not in-your-face at all. they are easy to listen to in my system. and the 45rpm helps to propel the musical flow and energy.

obviously the comments on the sonics pertain only to how they sound in my particular system. I've not heard them in any other system or tt.

as far as I can tell there are apparently 41 listed pressings, and I personally have acquired 23 of them. but curiously it seems only the first 29 in the series actually exist. and from what I understand; only approximately 300 pressings were done of each title.

on pressing number 7929 (done in 1979 and 29th in the series), there is a list of 41 pressings by composer, but I've not found any evidence that any actual records exist of anything beyond pressing number 7929. if they exist they must be in very small numbers. I've not found any other detailed information anywhere. likely were I able to read French that there is information out there in more detail. and FYI, all the album jackets are written in French.

these are not crazy expensive to buy on ebay at this point; anywhere from $29 to $89.....and I've seen them as high as $119. the biggest issue is they are almost all in Europe, so shipping gets quite spendy. every pressing I've bought would be considered 'mint' or 'mint-' to my ears. one was a bit noisy (cannot recall the catalog number).....but mostly they are dead quiet, and consistently good sounding. I'm no classical expert to judge the playing, but I've liked all of the 23 I have.

if you enjoy great sounding classical; I'd recommend trying a couple and see what you think.

I debated with myself whether to post about this; but I know some people really love to hear about the best sounding pressings, and these are in that category to my ears. 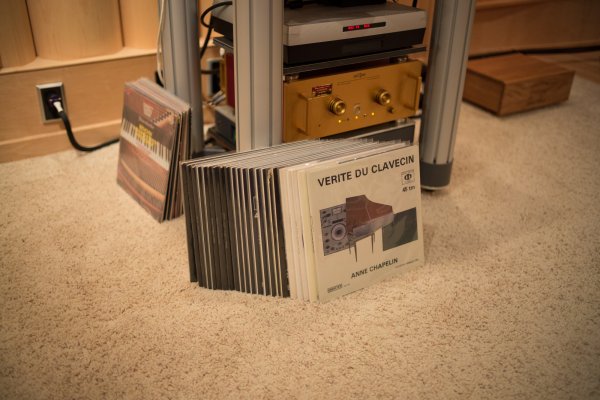 I will add that the first pressing in the series, No. 7701 (pressed in 1977, 1st title in the series) pictured above, is a harpsichord recording. it will likely be the best recorded harpsichord you will ever hear. it is fantastic.....a force of nature.

I can confirm what you say. 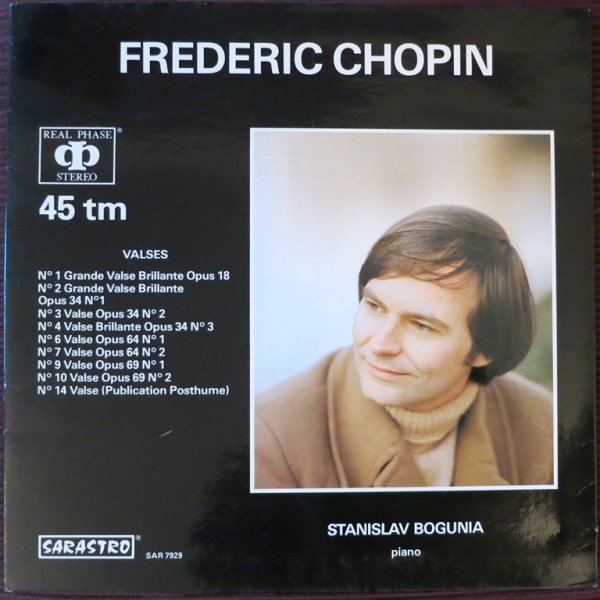 Reissues are availabel but I don't know how good they are. Link

Mike,
The Verite du Clavecin at the front of your stack is one of the TAS Super Discs. Pretty difficult to find in the pre internet days. I found my copy in a Paris record shop, maybe 20 years ago. Probably paid $20, a lot in those days. I have picked up a few others over the years - typically as I thumbed through Amoebas. I located four of them in my collection, two had Amoeba price tags on them, $1.98 and $2.98. The four are 7702, 7703, 7706, 7810, all ones you have. The back covers of the five I have all say, in French, "Why 45 RPM" and "Sound Recording" with essays about each topic. Clearly Sarastro was an audiophile label. The fact that you can't find anything about 7929 suggests to me that they either abandoned the series or went out of business. The timing suggests that the digital onslaught which begin about that time (the big European labels EMI, Decca, DG and Philips were all starting to release digital LP's in the very late 70's), may have had its effects.

I did finally find every Sarastro pressing, including the 'tough' 6 I had been missing. I found those 6 from searching ebay and google nearly daily and seeing them come up on various websites in Europe and Asia.

the most I paid is approx. $60usd, the least I've paid is around $25usd. the shipping is always spendy. every title has been essentially mint condition.

Mike, Sarastro has only made 29 records.
You can find the titles and more info at this link:

nostromo8 said:
Mike, Sarastro has only made 29 records.
You can find the titles and more info at this link:

thank you for that link. I had not seen that before. of course, I can't read French but it does have a good list. I do enjoy playing these wonderful pressings.

I do have all 29 of those listings. actually there is one 'double album' (7808/7809) so there are 30 actual pressings. and I have one more which is a 'test' pressing in a green cover with no writing other than on the label.