Pink Floyd (or so): Review of two concerts 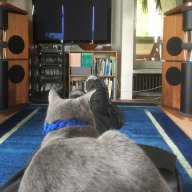 As the gods of post-Covid scheduling would have it, we visited two gigs originally planned for 2020 at the same venue, Jahrhunderthalle Frankfurt (Germany), within four days.

The first was our third Australian Pink Floyd Show within 5 years with the band doing their best to replay older songs from records like The Wall, Wish You Were Here, Dark Side of the Moon and Meddle (I think) more or less note by note which they do quite well. This is accompanied by a modern lightshow with lasers and video projection partly originated from Pink Floyd. They even have the original or exact copy of the huge blow-up teacher for “We Don´t Need No Education” (Also used in Roger Waters “The Wall” tour).
The first hour before the brake was o.k. but somehow lacked emotional involvement – maybe on our side, mainly – the second hour after the brake was better, reviving memories again of my best concert of all times, the original Pink Floyd at Knebworth Park Festival in England in 1975...
My wife and I afterwards both concluded that we would not need to see them for a 4th time but as cover bands go they are quit o.k. and if you like Pink Floyd and don´t expect too much you may like these Australians.

And now for yesterday´s Nick Mason´s Saucerful of Secrets: What a difference!
For those of you who don´t know, Nick Mason is the original drummer and founding member of Pink Floyd. His band members are Dom Beken, Lee Harris, Gary Kemp (former Spandau Ballet), and Guy Pratt (bass for Pink Floyd since 1987). They only played material from the early albums up to Meddle with a lot of Syd Barrett compositions and mainly, my favorites, those long and winding “space rock” numbers.
Besides being louder and having much better PA equipment literally moving my trouser legs with bass tones, the music was so much more precise, alive, soulful, sparkling, and fun than the pale copies of the Australians!
You could easily see that they were having fun on the stage, communicating with each other, even taking handy videos of the clapping audience after the last song, enjoying themselves.
And it showed in the music! They did not just replay that old 60s stuff, they recreated it, had intros into well known pieces for minutes before making them recognizable, wove different and new solos into them, drove them with feedbacks into the realm of abstraction. It was a feast and the music was so fresh and modern and revolutionary and timeless the audience had a blast.

A
New R2R tapes of Jazz at the Pawnshop from AudioNautes