The finished linear power supply approach for 205. Next step, the clock system...

just bought an Oppo UDP-2O3 (not really interested in mods for better audio) and a 65" version of one of these.....

picture blows me away. my wife and I are watching the 4K 'Nature II' right now and it's memorizing. 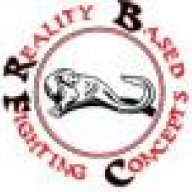 Mike Lavigne said:
just bought an Oppo UDP-2O3 (not really interested in mods for better audio) and a 65" version of one of these.....

picture blows me away. my wife and I are watching the 4K 'Nature II' right now and it's memorizing.

I guess I'm going to have to get my Sony VPL-VW1000ES 4k projector upgraded with the new boards so I can input 4k material. I bought it 5 years ago but rarely use it. finally there is 4k media worth watching.
Click to expand...
Mike,

Planet Earth 2 in 4K is the most unforgettable video experience I've had. You should check it out.

Planet Earth 2 in 4K is the most unforgettable video experience I've had. You should check it out.

The improvements presented/proposed here for both 203 and 205 devices, does not target only the audio section of these devices.
A linear power supply for the digital stage of the players, it have dramatically positive impact over the both picture and audio (either analogue outputs or HDMI audio) quality.

Coris said:
The improvements presented/proposed here for both 203 and 205 devices, does not target only the audio section of these devices.
A linear power supply for the digital stage of the players, it have dramatically positive impact over the both picture and audio (either analogue outputs or HDMI audio) quality.
Click to expand...
Thanks Coris; that was important what you just mentioned here...not only an improvement on the audio side but also on the video side.
_____
All the Very Best, - Bob --------- "And it stoned me to my soul" - Van Morrison --------- AudiophileAudition

I have just made some measurements on the analogue power system on stereo board of 205. Very disappointing result! This power system it suffer of a fully wrong filtering. It looks like Oppo had the intention to strongly spare on µF for the filtering capacities... I found on +/- power rails for opamps on board, over 200mV (100Hz) ripple. The worst case is about the main power rail for DACs power system. Here the ripple is about 350mV for a 6,3vDC. From this rail it is powered the regulator for the clock oscillators for the DAC chips... This is not good at all!
Last edited: Aug 1, 2017

The new version of my Clock board (battery powered). Mainly the same approach as before (SAW oscillator for 27Mhz, and high quality TXCO for 25Mhz), and now using a smaller battery. Smaller board dimensions, shorter charging time, the same very long time functioning (over 12 continuous hours), are some of the improvements of the new board design. This last version clock board it fit for use on all Oppo models.

My last version of a fully modded 203 (including fully differential XLR stereo outputs, added to the original audio analogue configuration). 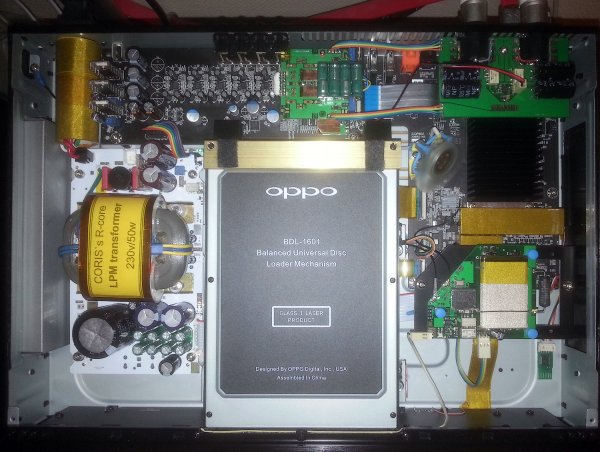 Coris, that looks like extensive modification from its original ↓ state. It looks very high end too. 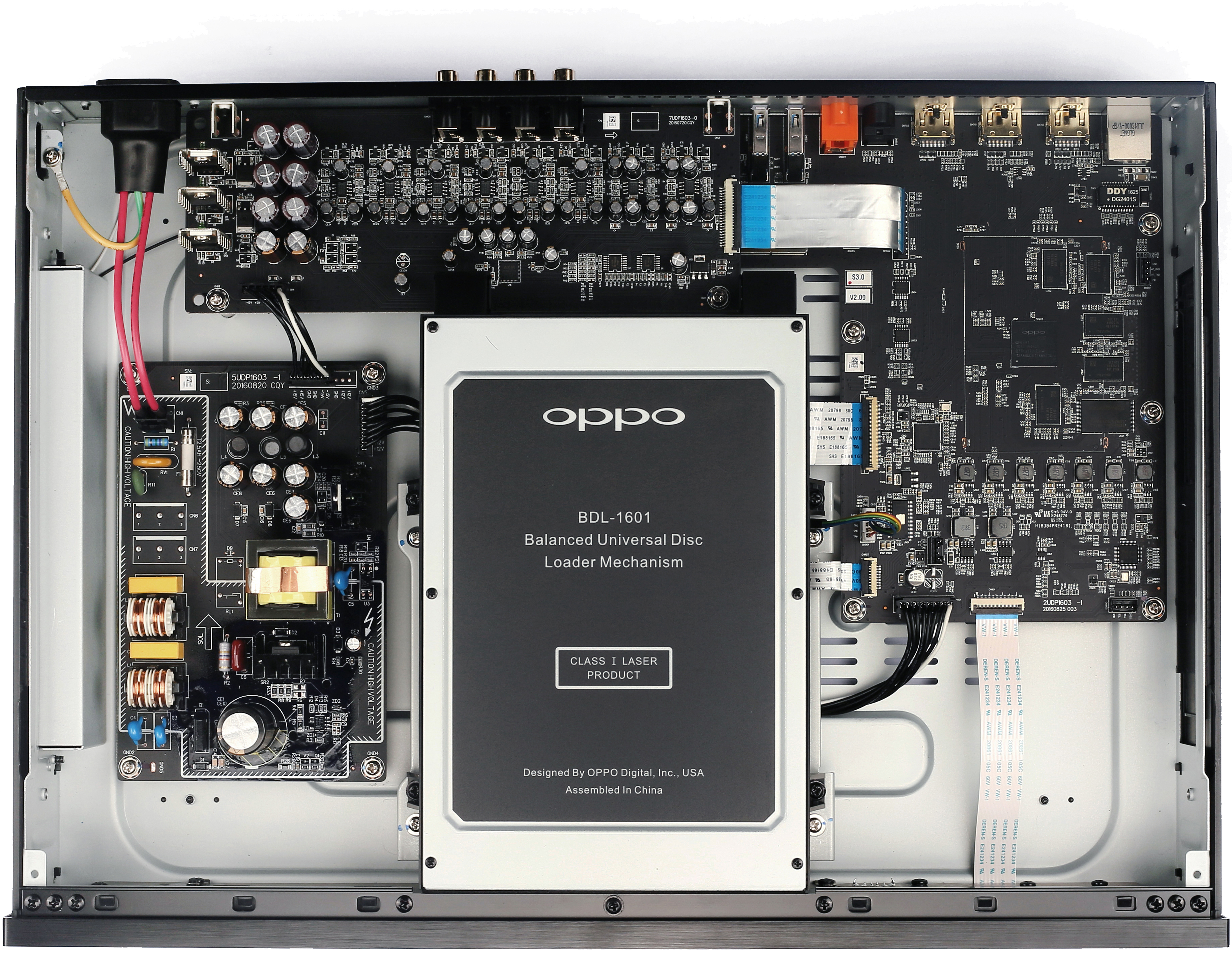 Some simple questions for you:

1. Are you using it yourself, or the mod 205?
2. Is music priority over images, or equal?
3. How long does it take for the full mod?
4. Did you make more than one and if yes what feedback do you get from users?
5. Cost, in US dollars?

Indeed, what you see in my previous picture is an extensive improvement for a 203 device. A complete improvement I can say, as it touch all the areas this device it can get improvements (as I know so far...):
-Linear power supply for both digital stage as analogue stage.
-Clock system based on SAW oscillator for main processor, and a precision TXCO for optical drive processor. All powered by battery.
-Fully improved audio DAC board (power system on board, DAC power system, added full balanced stereo XLR outputs, to the existing 8 RCA channels)
-Optical drive mounted on double elastic suspensions, and mechanically stabilised.
-Extended grounding and shielding, as improved ventilation

Answering to your questions...
1. Mainly the modifications for 203 (as pictured) are made on demand. I then use myself the modded device for a short while for testing and some fine tuning reasons. The improvements for 205 model (which I own it myself), are under preparing/development, and very soon available. The already available upgrade for 205 model, the linear power supply (LPM) it can be seen in the picture hereby.
2. The improvements in both cases (203-205) are targeting both picture and sound. Linear PSU for digital stage as clock system improvements it have dramatic impact over the picture quality. The rest of the improvements are directed to the sound quality increasing.
3. A fully improved 203 device working time it may take into two weeks.
4. Yes, it was done it more than once, and the mod approaches it was improved itself since the first modded device. As you can see, the improvisations in this work are mostly eradicated, and particular modules it was designed and produced for upgrading purposes. The overall result is accordingly... The feedback is only positive so far, but mostly in French...
5. An max overall price for a full upgrade (as pictured) it may come up to 1300$.

Well, French language is indeed not so popular in Norway, but the most of my customers are francophone so far... Only by chance...
Here is a link from a thread, which it can give you some more informations in the field (quite much to read back and forth through...):
http://www.homecinema-fr.com/forum/...teurs-uhd-oppo-udp-203-205-t30077820-630.html

And a link to a Norwegian forum/thread:
http://www.hifisentralen.no/forumet/vennetra-der-hifimerker/58732-oppoa-s-venner-18.html
Last edited: Aug 27, 2017

I have read that French is offered @ school to the children...French immersion.
But true, French is not a popular speaking language in Norway.
When you mentioned most of your customers as being francophones, I was wondering about their origin, their country.
I did some quick searching about Norway, and I thought about France, and even French Canadians.

Thanks Coris for the two links; it is always a benefit to expand our horizons.
And what you share here with us, I share with the people who have an invested interest in your work, because I like what you do; improving sound and picture.
All the Very Best, - Bob --------- "And it stoned me to my soul" - Van Morrison --------- AudiophileAudition

Thanks for your appreciations. 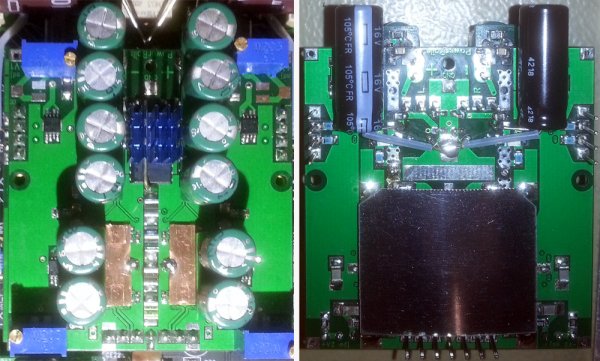 The improvements so far: Massive primary filtering capacity. Replaced the original rectifier diodes, with Schottky. Replaced the original +/- regulators with LM2991/2941, mounted on a new designed module. Added pre regulators for DAC power rails: one regulator for the digital DAC power rails, and one regulator dedicated to the analogue power rails (AvccL/R). This last pre regulator it use the multi-channel board DAC power, which it became available, as I will not use that board/outputs. In case the multi-channel board should be used, then there is a solution, by keeping this pre regulator in same place.
The main problem for the original analogue power stage is the very high ripple at the low noise regulators inputs, because a wrong dimensioned power source as poor filtering. Now is corrected and improved.