You are using an out of date browser. It may not display this or other websites correctly.
You should upgrade or use an alternative browser.
P

I previously posted a request for information on the Audion Super Sterling 20th Anniversary KT120 SEP amplifier. There is only one reviewer of fairly good readership online on it, and a couple more of lesser fame.

As background, I am inclined to acquire boutique brands and unique models out of sheer curiosity. If the design is intriguing and has the potential to deliver something unique, I'm game.

I kicked around the idea of purchasing the Audion for more than a month. It had the potential to meet objectives Ive been trying to find in a single amplifier. 1) Class A, 2) Single Ended 3) over 20 wpc and 4) affordable. Achieving all four requirements had been elusive.

Not having enough nformation on it to form a decent sized consensus from a number of sources was a worry. Also, that it does not have a following that cared to post much about it was not encouraging. That is, until last weekend. I dug deep into my Google search, upt to pages 7-14 I believe, and found some interesting positive posts on forums. These plus the opinions in the reviews above gave me a basic idea that it was probably a decent amplifier.

So off I went driving the 1.2 hours from Venice Beach to Laguna Niguel 8 am on a Saturday. It was not such a long slog. The wife came with, and we agreed to have a nice lunch on the drive home. Getting there at 9:30am, I was met by a kindly Vietnamese American man, I'll call him Mr. T. A real pleasant fella who was not averse to showing me his home system.

He has 15" Tannoy Reference (?) speakers, Shindo Auriges preamp, feeding the Audion, from a Chord Qutest and a real fancy transport I was unfamiliar with. He also had a Kuzma Stabi TT, and an Audion phono pre. In the background is an 80 pound Jadis tube power amp. 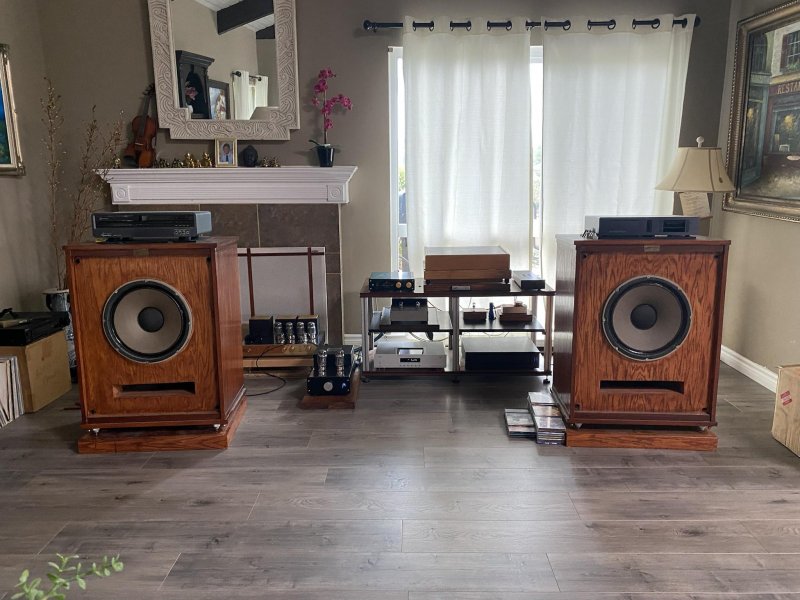 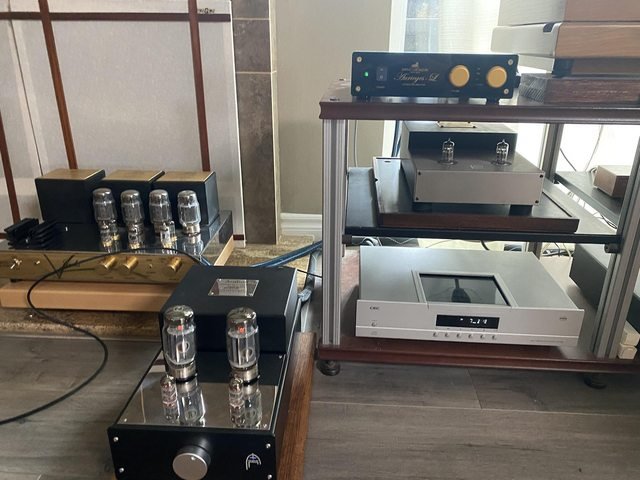 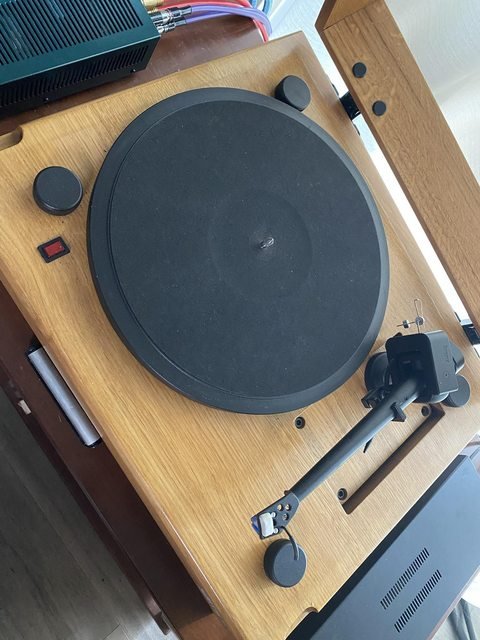 The Audion passed my physical and functional inspection. It's a deal!

I am not fortunate enough to have a budget commensurate to my taste in equipment. so I seldom buy new. During a demo, I primarily focus on function. I dont really do much critical listening when buying used. When I'm there, I've already made my mind up on the unit unless I uncover an issue that I had not considered. I nit pick on condition and try to confirm a clean output. I find it difficult making buying decisions with listening sessions limited on time, on unfamiliar gear and in an unfamiliar room. That's me. I rely primarily on reviews and opinions of thise thta have spent time with the unit. When buying new from a dealer, its different. Used, this is my process. Unless I'm buying from a friend who offers extended listening sessions

So I got the amp home and set it up. For reference, my system has analog and digital sources feeding into an Allnic L3000 preamp, a Pass Labs X150.8 stereo power amp to Devore Fidelity Gibbon X speakers. Its a modest system by WBF standards, I like it.

Initial impression was that the amp is ok. The bass drive is impressive for a single ended amp. It didnt have a lot of magic. Just a smidge. I listened to it for a couple of days before I started peeling the onion.

Today Monday, I started looking at the amp deeper. First, I pulled all the tubes and ran them through my B&K 707 tester. The 707 is a basic tester that has enough functions for giving tubes a thumbs up or down. The shared 6H23N input and driver tubes passed. However, I really felt they were tired. In my experience, tired tubes will pass but can be dull. I've had this happen a few times, and its usually a good idea to run fresh tubes to compare. Luckily, I had some new Electro Harmonix 6922 gold pins in my tube caddy. I tried them in for both input and driver positions. The result was an immediate and dramatic improvement. The realism of the midrange was palpable. Rolling some tubes I had on hand, JJ E88CC, Amperex 6922, etc, I settled on a EH 6922 gold pin at the input and Amperex Bugle Boy 6DJ8 in the driver socket. The amp was very good by all measures but its hard to describe its character. After hours of listening, I came to a realization on what it does great. If you know what I mean when your emotions are stimulated when a violin or a voice is reproduced magnificently, the Audion Super Sterling KT120 is a constant source of a variety of audio cues that makes ones heart flutter over and over again. It's an amazing amp.

Another surprising characteristic of the amp is the power of its bass. It is a 24 wpc single ended pentode amp that delivers as much bass as I want to run through my 91db speakers in a 17' x 30' room as I care for, achieving 94db peaks easily while delivering a good amount of class A single ended sweetness.

When buying gear more than a couple of years old, it is not surprising to me that equipment can use a freshening up. For finishing touches to the new to me amp, I cleaned all the tube sockets and rear panel contacts with a pipe cleaner and DeOxit. I also have a faint bacon sizzle coming through the speakers when there is no signal. This is usually, again, a sign of tired tubes. I ran the KT120s through the tester again and found one of two tubes to register just barely over PASS for 6550s. The other tube was strong, registering well past 120% on the tester meter. I ordered a new set to troubleshoot the sizzle. If its not that, I may get it checked by a tech to check the plate resistors on the power tubes.

Incoming as well are 6H23N-EB super tubes. Theyre supposed to be real good. Also a pair of 6SN7 6922 tube adapters. I have a bunch on 6SN7s I plan to roll on this amp.

In summary, if you ever find one of these amps, give it a listen. There is almost no equal to it on the market at 24 wpc, single ended, one tube per channel, with this much drive for the what I paid for it, or even 2X that.

On its way home on the floor of my car. 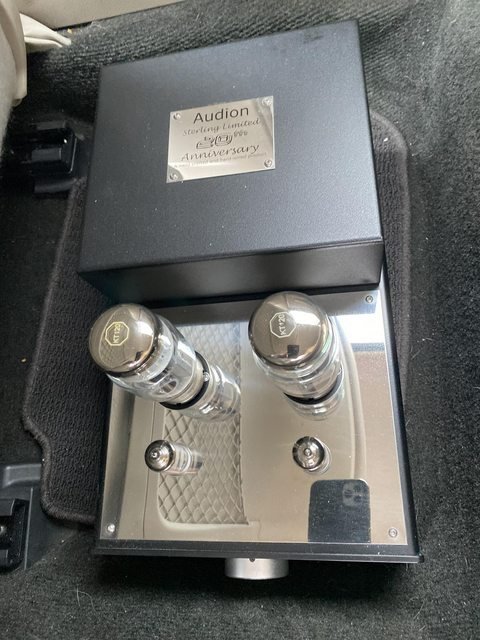 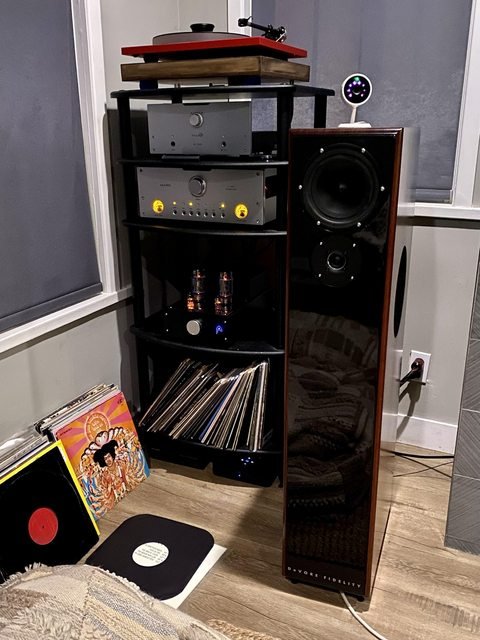 I am going to wait a couple of months, and if my infatuation with the Audion doesnt subside, and weeks substituting one for the other, the Pass amp may be sold.

Does anyone else believe that truly hearing what a system is capable of cannot be had with 10 minute listening sessions? I am of the belief that one has to learn to listen to a rig, live with it, to truly hear what one can get out of it. 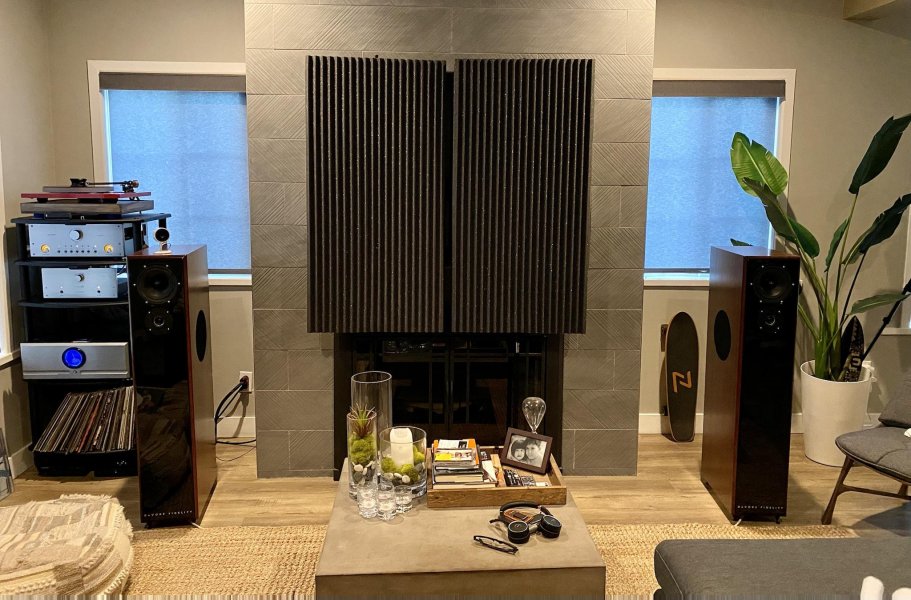 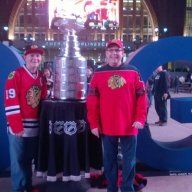 Very nice job and enjoy!
You must log in or register to reply here.

P
Looking for opinions on the Audion Sterling KT-120 amp