The large Genesis Technologies loudspeakers have an external servo-controlled amplifier for the woofers. The usual complaint about these speakers is that the bass is "slow", or that the bass is not integrated with the midrange - although there have also been reports of excellent coherence. The cause of these problems can be primarily attributed to the way that the servo-amp is hooked up.

There are a couple of problems that could arise:

1) if the two amplifiers have a different sound, it can be heard as a different character. This is especially true of some types of tube amplification used for the midrange/tweeters.

2) because the power amp drives the midrange/tweeter through a crossover, and the servo-amp (which also has a built-in crossover) drives the woofers, the difference in group delay could be heard as "slow bass" - the Genesis servo-amp has a phase adjustment, but the phase can only be delayed. Most times, as the crossover of the loudspeaker has a greater phase shift, it is the power amp that needs a delay. 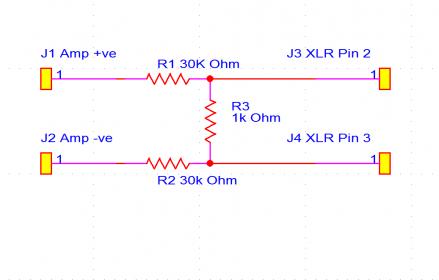 On the left side of the circuit, place as close to the XLRs as possible - we build it inside the XLRs when we sell this as a cable upgrade. XLR pin 1 is shield, and can be chassis grounded. Make sure R1 & R2 are well matched and sound good. I use a Vishay metal film.