I Went To Church And Can't Wait To Go Back

I'm in VA visiting my parents. They have to go to church every Sunday. It's their thing. I figure, what the heck, I will go. Its a small place. Maybe 12 pew's deep and 2 wide. As usual, again, the paster eviscerates my family and how we live. I really am amused how my folks sit there and smile and it all goes over their head. Its quite entertaing for me.

More entertaining is they have a live piano played along with a synthesizer organ as the people sing. I listened with rapture to how that piano voiced in that room. How it blended with the voices and the fake organ. What really struck me was the idea of (Live Listening Levels). I experience what I feel is way to many audiophile crank the living you know what out of their systems. Trying to reach what they call live listening levels. Concert levels. It generally is to loud for me and I have to plug my ears. But this church with its organ, people and piano while being very there in the moment is far from being ear splitting. Its actually quite soothing. It's not loud at all. Its full, complete and very enjoyable.

A good system does not sound loud but can hit above 90 db or more
an example matry’s place
the couch vibrated as it does at my place but the perception was not loud never offensive just real scale up and down
if a given system screams at you well they need to fix it.
down south I had an upright piano at one time
the room is 30 wide 9 feet or more high
15 deep. The piano at times rang my ears
opened some windows much better.
If the room is treated well
itis live but absorbs as well. again Marty’s room is perfection at this and I’m sure mike L place is too.
Toggle signature
The TUBEZATOR

It very much depends on the circumstances how loud the music sounds live.

I once went to a concert at the Boston Symphony, sitting in approximately row 10, where they first played Beethoven's Fourth Piano Concerto. It was not loud at all, the piano seemed kind of soft, and the orchestra must not have played above 90 dB peaks at the most.

Yet in the second half they played Shostakovich Symphony #11. That was with considerably more players of the BSO on stage, a very large orchestra in fact. That was ear-splittingly loud at the same seat, with peaks of maybe 110 to 115 dB. Incredibly powerful sound, for sure.

At another concert at the Boston Symphony I sat in the first balcony, close to and just above the orchestra, which played Shostakovich Symphony #4. That was even louder, with peaks of probably 120 dB. It was tremendously exciting, but I don't want to do this to my ears more than once or twice a year, if even that. Having a daily dose of this would quickly become ear damaging. And no system can play cleanly that loud -- even just the room very fast becomes a limiting factor here. Nobody has a concert hall at home.

I have heard string quartets sitting at a distance in a larger hall playing no louder than with peaks of 70 dB, really pretty soft. Yet at another occasion I have heard a string quartet close-up in a small venue with peaks of easily 95 dB. In the same concert, at the same close-up seat, a horn quartet (French horn, flute, clarinet and, I believe, oboe), was much louder than that. Really loud.

At one concert in the German Embassy in Boston I sat at only about six feet from a string quartet, and while the sound was incredibly good and thrilling (maybe the richest and most detailed sound I have ever heard from a string quartet), it was ear-splittingly loud. I have never heard a string quartet that loud; peaks must have been 105 dB at least, probably more like 110 dB. It was so brutally loud that I was glad for my ears when the 20 minute piece, which I loved, was over.

At home, my orchestral peaks are at about 100 dB. Now with all the changes to power, acoustics and other set-up this can sound pretty effortless, recording permitting. I don't want to go beyond those sound levels, for my ears' sake.

Maybe my point is, why does it seem you have to turn up a stereo quite loud to have it more closly approximate the sound of real instruments. The Piano I was listening too live was not loud. But it was so magnificent to listen too. To get that sort of real level of performance with a stereo, it seems the volume has to go up quite high. Is it a sweet spot in each system that requires the amps to work so hard and the drivers to recieve so much power and move so far to work at their most optimum performance level.
Toggle signature
PAP Trio 15 Horn, Custom 845 SET Monoblock, Dartzeel NHB108, First Sound Mark 3 SI Pre, Mojo Audio Mystique V3 DAC and Mojo Audio Deja Vu Server, STST Motus II TT with Vertere SG1 arm and Hana ML, Bobs Device SUT, Allnic H1201, Aris SB8200 With LPS, Asus RT-AC5300 with LPS, Linear Solution switch with LPS, Blue Jeans Cat 6 throughout, Inakustik speaker and interconnects, Custom 10 AWG Oyaide branch circuits to rack bolted direct to custom power strip and amplifiers, Akiko Coreli, AddPower Symphony and Electraclear. Otari MX5050 direct wired to Music Technology outboard tape preamp.
Owner KingrexElectric.com Residential Electrical Infrastructure Optimization. Manufacture of custom electrical power panels.
A

And my point was, yes you have to turn up the stereo quite loud to have it more closely approximate the sound of real instruments, since often they *are* loud.

As for piano, I mentioned an example where it wasn't loud live either. But I also have heard piano in small venues close-up. It was loud. Very loud. Sometimes very, very loud even.

You cannot extrapolate from experiences in a single venue, and from where you sit there relative to the performers, to all situations.

I think it's relevant to consider that the SPL readings we're getting from our smart phones, in my case anyway, are 5-10 db higher than a more professional sound meter. I've been listening more near field lately and my iPhone meter is typically in the low 80's avg with peaks 100-105 db. And this is very comfortable listening. I'm guessing a pro meter, calibrated, would measure lower.

wil said:
I think it's relevant to consider that the SPL readings we're getting from our smart phones, in my case anyway, are 5-10 db higher than a more professional sound meter. I've been listening more near field lately and my iPhone meter is typically in the low 80's avg with peaks 100-105 db. And this is very comfortable listening. I'm guessing a pro meter, calibrated, would measure lower.

Or maybe this can't be generalized. Curious what others have found.
Click to expand...

I use dedicated SPL meters. They are not for re-calibration, but vary little between individual units. Their readings also are in good agreement with those of other brands:

to make a real sounding live event in anyroom is impossible for many reasons . and im sure ill get trolled for saying now . one poster did make realize this on speakers . how fast they can rise and fall is in part why we need to play louder . in someways we are trying to fix what cant be . we can get the tone , timbre even layers . but we cant reproduce a complex sound like a piano . what we can do is reproduce a sound that our brains feel close enough to fool us . anyone who has a real piano in there room and i know one who does and i really look up to him . it may sound great but im guessing its not a real piano if played back and forth .
Toggle signature
The TUBEZATOR 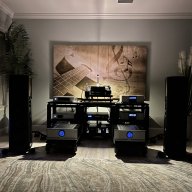 Some churches have a Full Orchestra. One huge church in Naples, FL (which had some serious acoustic work in the sanctuary) has/had a concert pianist who use to to play every Sunday. She was excellent. A lot of great singers began in churches.
Toggle signature
Sincerely,
Joe
Reference Audio System
Mono & Stereo
Reactions: Alrainbow
You must log in or register to reply here.

R
Room measurements and what to make out of them