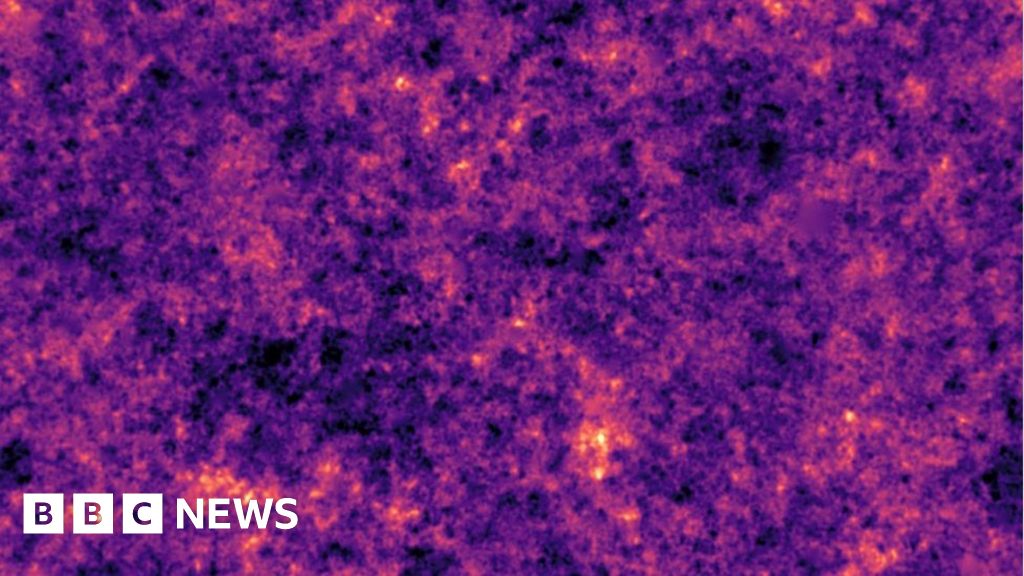 The most detailed map of dark matter in the Universe is puzzling physicists.
www.bbc.com 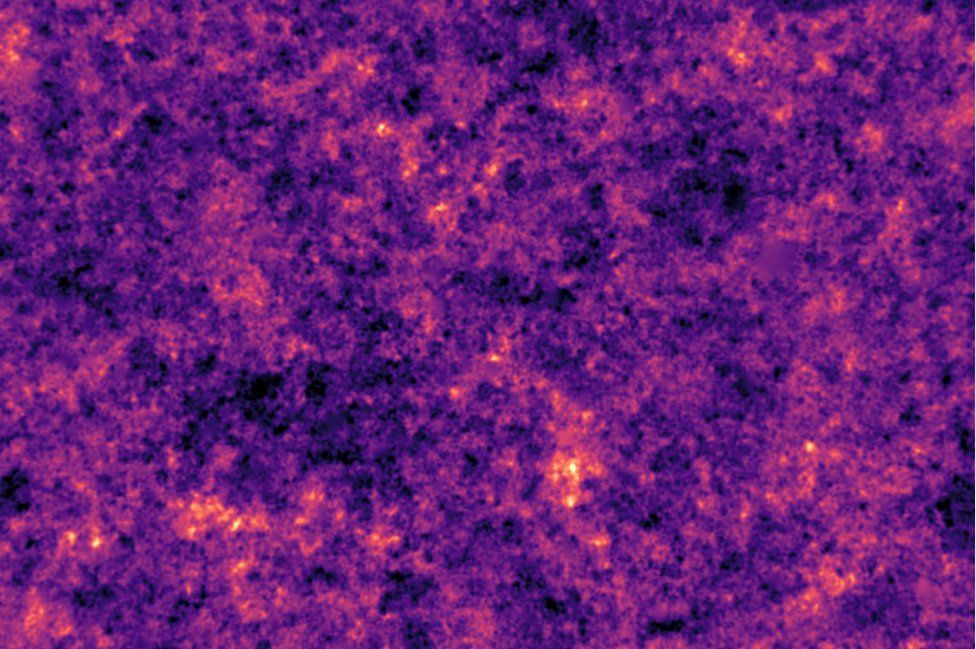 IMAGE COPYRIGHTN JEFFREY/DARK ENERGY COLLABORATION
This is the most detailed map of of the distribution of dark matter in the Universe. The bright areas represent its highest concentrations - which is where galaxies form

An international team of researchers has created the largest and most detailed map of the distribution of so-called dark matter in the Universe.
The results are a surprise because they show that it is slightly smoother and more spread out than the current best theories predict.
The observation appears to stray from Einstein's theory of general relativity - posing a conundrum for researchers.
The results have been published by the Dark Energy Survey Collaboration.

Dark Matter is an invisible substance that permeates space. It accounts for 80% of the matter in the Universe.
Astronomers were able to work out where it was because it distorts light from distant stars. The greater the distortion, the greater the concentration of dark matter.

Dr Niall Jeffrey, of École Normale Supérieure, in Paris, who pieced the map together, said that the result posed a "real problem" for physics.
"If this disparity is true then maybe Einstein was wrong," he told BBC News. "You might think that this is a bad thing, that maybe physics is broken. But to a physicist, it is extremely exciting. It means that we can find out something new about the way the Universe really is."


Prof Carlos Frenk, of Durham University, who was one of the scientists that built on the work of Albert Einstein and others to develop the current cosmological theory, said he had mixed emotions on hearing the news.
"I spent my life working on this theory and my heart tells me I don't want to see it collapse. But my brain tells me that the measurements were correct, and we have to look at the possibility of new physics," said Prof Frenk.
"Then my stomach cringes, because we have no solid grounds to explore because we have no theory of physics to guide us. It makes me very nervous and fearful, because we are entering a completely unknown domain and who knows what we are going to find." 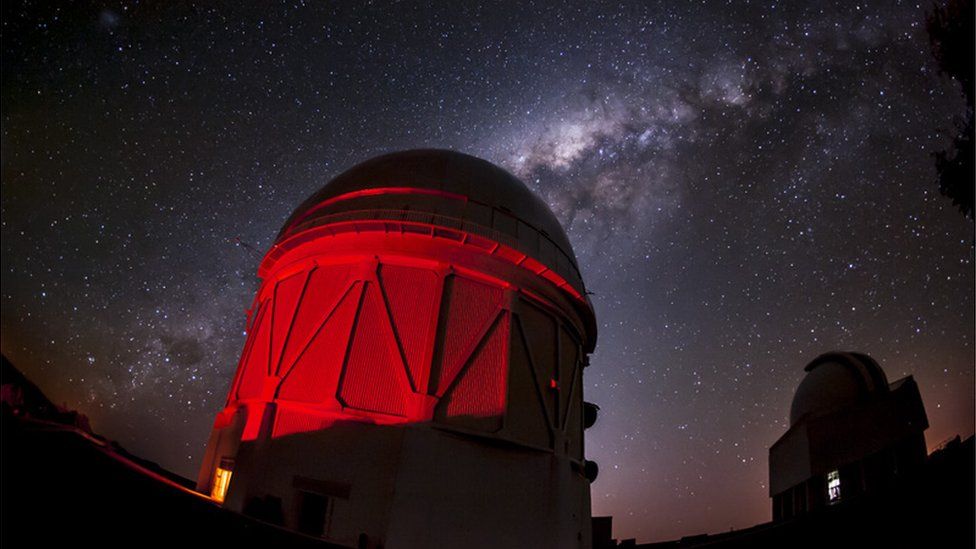 The map shows how dark matter sprawls across the Universe. The black areas are vast areas of nothingness, called voids, where the laws of physics might be different. The bright areas are where dark matter is concentrated. They are called "halos" because right in the centre is where our reality exists. In their midst are galaxies like our own Milky Way, shining brightly like tiny gems on a vast cosmic web.
According to Dr Jeffrey, who is also part of a department at University College London, the map, clearly shows that galaxies are part of a larger invisible structure.

"No one in the history of humanity has been able to look out into space and see where dark matter is to such an extent. Astronomers have been able to build pictures of small patches, but we have unveiled vast new swathes which show much more of its structure. For the first time we can see the Universe in a different way." 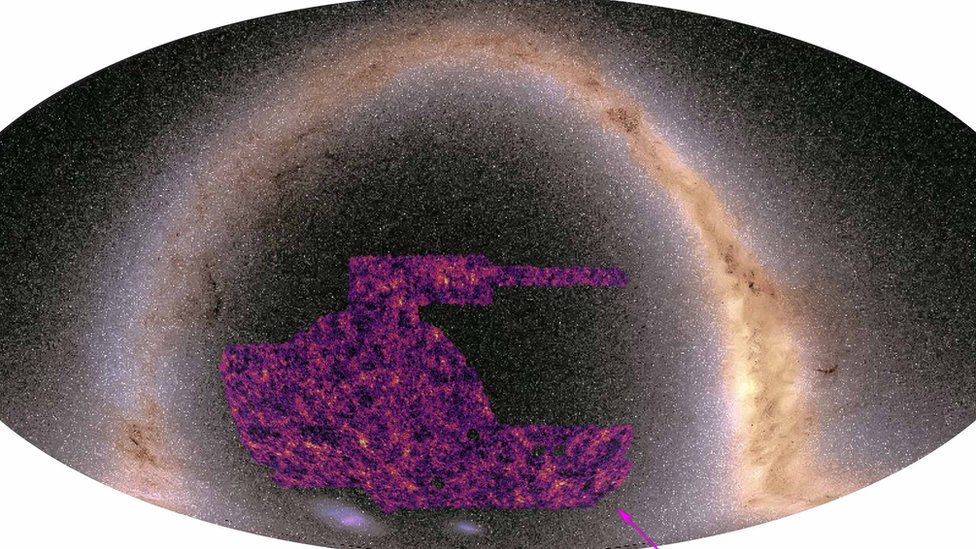 IMAGE COPYRIGHTDARK ENERGY SURVEY CONSORTIUM
The oval represents the entire sky, with the purple as the area that has been surveyed so far for dark matter. The bright arch is formed from the brightest stars in the night sky


But the new dark matter map is not showing quite what astronomers expected. They have an accurate idea of the distribution of matter 350, 000 years after the Big Bang, from a European Space Agency orbiting observatory called Planck. It measured the radiation still present from that moment, called the cosmic microwave background, or more poetically, the "afterglow of creation".

Drawing on the ideas of Einstein, astronomers, such as Prof Frenk, developed a model to calculate how matter should disperse over the next 13.8bn years to the present day. But the actual observations from the new map are out by a few per cent - it shows that matter is slightly too evenly spread.
As a result, Prof Frenk thinks there may be big changes afoot in our understanding of the cosmos.

"We may have uncovered something really fundamental about the fabric of the Universe. The current theory rests on very sketchy pillars made of sand. And what we may be seeing is the collapse of one of those pillars."
But others, such as Prof Ofer Lahav, of University College London, have a more conservative view.

This is a very exciting time in the study of astrophysics. The measurements in this article are part of an enormous revolution in our view of the universe and its contents. I studied astronomy (astrophysics) in college and grad school 50+ years ago. At that time we had refined our knowledge of the universe pretty well (we thought), and knew what was in the universe. Galaxies, stars, gas, dust, etc. that was it. We knew that universe was expanding and slowing down. The main question was it slowing down enough to stop and fall back on itself, or would it slow down but never stop expanding.

Fast forward to today. Now we believe that everything that we knew was in the universe back then makes up about 5% of the actual universe. About 20% is made of dark matter (something or things that have mass and gravity but cannot be otherwise detected). The distribution of this dark matter is the subject of the observations in the article above. The other 75% is made of dark energy, which is not matter, and cannot be directly detected, but whose effect is causing the universe's expansion not to slow down, but to accelerate! So everything I learned in college and grad school and the beauty of the heavens we see in the night sky or otherwise directly detect is part of the 5%. 95% is dark matter or dark energy.

When Newton did his work, there were definitely observations that the old models were wrong. That also occurred with Einstein. So we are clearly getting observations that are indicating that we don't know what is going on - we just need the next breakthrough in our understanding.

Our Galaxy and The Cosmos-To Infinity And Beyond Jun 18, 2021
BlueFox

A scientifically mysterious, isolated cloud bigger than the Milky Way has been found

Our Galaxy and The Cosmos-To Infinity And Beyond Jul 4, 2021
Addicted to hifi

Our Galaxy and The Cosmos-To Infinity And Beyond May 26, 2021
Addicted to hifi

Scientists claim to have accurately measured all matter in the universe

No black hole at center of Milky Way?

Our Galaxy and The Cosmos-To Infinity And Beyond Jun 20, 2021
astrotoy