I purchased this on a lark after getting and being very satisfied with my new maxed-out iMac. These are actually quite surprising in terms of sound quality. I've written quite a bit about my wide-ranging experience with top-flight headphones in other threads here in Tom's Corner. My current stable includes the Stax SR009S (powered by a Mjolnir Audio Carbon amp), the Koss ESP 950 (also powered by the Mjolnir), and NAD Viso HP-50. All other headphones I've owned (including the Sennheiser HD800S, Focal Utopia, Audeze LCD-4 and 4z, and Dan Clark Ether 2) have been moved along and none of the others I've auditioned at shows (including the Abyss models, Hi-Fi Man electrostats, and the progeny of the old AKG 1000 off-the-ear designs) have been found worthy.

So it was surprising when the new Apple model proved worthy of keeping, at least for a while. They are quite good sounding--very spacious and quite neutral in response, at least when used via Bluetooth from my iMac. They do not sound quite so good when sourced from my iPhone 11 Max. They are the best I've used with binaural recordings--the effects are most realistic on them, in other words. But even with normal material they are good enough that I don't feel an instant strong urge to switch back to my Stax when listening to them for viewing movies or streaming music. They present as "open" and "large" a soundfield as any headphones I've experienced.

They are quite heavy and have a good deal of head-clamping force, though, so that makes them not as comfortable as any of my other headphones. The noise cancellation function works very well indeed, but it's really not needed since these are not open back and seal out a lot of noise even when the noise cancellation function is turned off. They also have a "transparency" function which allows you to hear your environment quite well by using the built-in microphones which also pick up your voice for audio/video calls--the transparency mode is very close to what you hear from your environment when you take the headphones off. I would say that the headphones sound remarkably similar in all modes; just a tad better with the noise cancellation feature turned off than in the other modes.

They look very high in quality--not at all plasticky--and very sturdy. The cushions are attached magnetically and come off easily for cleaning.

Much is made in Apple's advertising about the special stereo processing (spatial audio) built in. But, as it turns out, this only works (at least for now) when sourcing sound from Apple devices which contain gyroscopes, which my iMac doesn't. Only iPhones and iPads do. Besides that, right now it doesn't work with most music sources, mostly just some video services, like Apple's own. I found that a big disappointment at first (this was not clear from the info I read prior to ordering them), but these sound so good with normal stereo that all is (mostly) forgiven already. The fact that they do binaural sound so well is a compensating plus since that's also a rather small percentage of available recordings.

The software is supposed to learn to produce better sound as it accommodates to your head and hearing. Not sure how that's possible, but either I'm getting used to the sound more each time I don them, or they are actually breaking in/sounding better now than when I first put them on. They also seem to improve in sound during each session as I wear them.

These actually sound quite a bit like the NAD Viso HP-50. They have the same sort of warm bass balance with extended and quite capable deep bass along with highs which are a bit soft. They portray a similarly "out of the head" impression, although more as in wider and higher soundspace, as opposed the the NADs which are uniquely "out there" in front in a way that mimics speaker sound. The midrange is fairly neutral, but here I'd give the nod to the NAD which is peerless in terms of midrange neutrality. The Apples are just a bit too heavy in the lower mids, especially noticeable on male voices I know well. However, this coloration is comparatively slight and is less obnoxious than a thinness which would rob baritone voices of their natural weight. It is also a coloration which is reduced by the adaptive EQ as I wear them.

In sum, a very pleasant surprise, especially if you don't like being tethered by a wire to your source. These are hugely better sounding than the prior Air Pods Pro IEMs which my wife owns.
Last edited: Feb 8, 2021
Reactions: Andrew S.

My appreciation for these AirPods Max continues to grow. Yes, the midbass is stronger than with my NAD or Stax SR009S headphones, but not in an unpleasantly boomy or overly heavy way. The balance is a great match for a wide variety of video and musical material as presented on my iMac.

The image focus is quite sharp, and this, combined with the overall very large (wide, high, deep) presentation complements the rich midbass well, creating a pleasing combination of tonal density/gravitas, focus, and openness. These are keepers, at least for use with my mid-2020 iMac.

These sound yet better with my new 2021 24" M-1-chip-based iMac. However, my other headphones, both the NAD Viso HP-50 and Stax SR009S, also sound yet-better now fed from this new computer. Further listening confirms that while all three are quite pleasurable and accurate sounding for computer-based movie/TV streaming, the pecking order remains #1 Stax, #2 NAD, #3 Apple. The NAD remains the most tonally neutral, but the Stax wins on clarity and unforced detail without brightness.
Reactions: Andrew S.

Stax has a new reference headphone out now.its actually being a long time since they released a new flagship.

tmallin said:
These sound yet better with my new 2021 24" M-1-chip-based iMac. However, my other headphones, both the NAD Viso HP-50 and Stax SR009S, also sound yet-better now fed from this new computer. Further listening confirms that while all three are quite pleasurable and accurate sounding for computer-based movie/TV streaming, the pecking order remains #1 Stax, #2 NAD, #3 Apple. The NAD remains the most tonally neutral, but the Stax wins on clarity and unforced detail without brightness.
Click to expand...

If you get to compare the new stax with your stax headphones it will be interesting to see how much better the new ones are.

I may well order the new SR-X9000 headphones once they are available. As of this writing, they are still in pre-order status. However, Stax does indicate that the new flagship will start shipping in October 2021 so availability shouldn't be too far away now.
Reactions: Addicted to hifi

While I once owned both the Audeze LCD-4 and 4z, in hindsight, I have not heard any Audeze headphones which sound truly neutral. All three of my current headphones--the Stax, the NAD, and, yes, even the Apple Airpods Max--are far less colored sounding than either of these formerly top-line Audeze. The Audeze house sound is big pfwoomy bass, warm, lower midrange, with a recessed presence range. Pleasant sounding on a lot of nasty bright material, I grant you, but with better recordings, just not natural sounding. While I have not heard the new Audeze electrostats, unless they've changed their house sound, I'd go with the "real" sound of Stax headphones any day.
Reactions: Addicted to hifi

I am in the hunt for new headphones and will listen to stax and audaze electrostatic as well as the new audaze planer Lcd5.
B

These are absolutely worth a listen. They’re one of my new favorites: 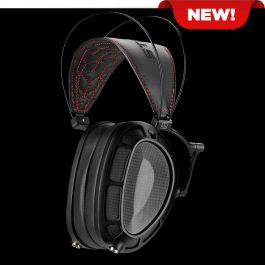 STEALTH is Dan Clark Audio’s closed flagship headphone, and its striking matte black and red design offers a teaser of its stunningly smooth, rich and spacious sound. STEALTH is a closed-back headphone that delivers great isolation, while our proprietary Acoustic Metamaterial Tuning System...

Okay, game changer here. At sometime in one of the recent updates to my 2021 M-1 iMac OS (now running Monterey 12.0.1) the Spatial Audio feature of the Apple Airpods Max was enabled for a lot of video streaming content, such as Amazon, Netflix, and Hulu. The spatial quality of the sound now available from these sources is far beyond that available via my other headphones, the NAD Viso HP-50 and Stax SR-009S.

This increased three dimensionality much more than makes up for whatever the Apple phones may lack in extended bass or treble frequency response or ultimate detail retrieval. In fact, separating out the detail in an expanded space makes these AirPods Max sound more detailed than the other phones without at all brightening the sound.

The stereo sound is now very much like speakers in that, for dialog, for example, the sound is very clearly "out there" in front of me, at or behind the screen in depth. The 3D field is extended further left, right, up, and down as well. It's a "big" sound, bigger than any other headphones I've ever heard.

There is also head-tracking added. If I turn my head right or left, the dialog does not move but stays glued to the screen. Impressive.

It sounds for all the world as if I have both stereo speakers--truly excellent ones--playing in front of me while also hearing the sound coming from headphones for a wider stage.

There is also a much greater sense of actual envelopment. While I haven't heard any special effects come from directly behind me yet, the apparent position of sound effects definitely extend out past and to the rear of 9:00 and 3:00 o'clock and I also hear effects up and down with respect to my position.

Even without overhead speakers or sounds definitely coming from overhead or behind me, it's a more convincing and natural sounding surround effect than any home theater system I've experienced. It's "solid" in the original sense of stereo. The way dialog is now embedded in the overall scene is truly amazing.

Spatial Audio is not available (yet, anyway) from any audio-only streams I've tried--internet radio, Qobuz, Tidal, or my own music files. One can only hope . . . .

Just after writing the above, I tried the AirPods Max with my 2021 M-1 iPad running iOS 15.1. With that device, Spatial Audio IS available on audio-only sources, both with and without head-tracking. It seems to be available with most any stereo audio program I tried: internet radio soources, Tidal, and Qobuz. While the effects don't seem as strong as on the video programs through my iMac, the added realism is still quite impressive. It's a new day indeed for headphone listening with this sort of "out of the head" presentation available basically for free as Apple has upgraded its software.
You must log in or register to reply here.